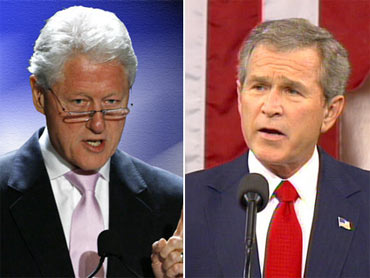 It is the first joint visit to the impoverished Caribbean nation for the two former leaders, who were tasked by President Barack Obama with leading the U.S. fundraising effort.

After meeting with President Rene Preval on the grounds of the collapsed national palace, they were expected to tour the tarps-and-tent city on the adjacent Champ de Mars, the national mall filled with 60,000 homeless quake survivors living in squalor. They are also scheduled to visit a factory near the airport.

Bush told reporters their purpose was to see the devastation first hand and "remind the American people there is still suffering and work to be done here." He said they also wanted to encourage entrepreneurship in Haiti to create jobs and grow the economy.

"Our mission is to help fill the gaps of human needs and help create jobs," Bush said.

Lucharles Jean-Laudius, one of hundreds of thousands of people left homeless by the earthquake, welcomed the presidential visit as a sign that the U.S. would continue to supply aid. He feared the recent withdrawal of American troops was a sign the world was losing interest in their plight.

"But if the presidents are coming it's because they want to help, that's a good thing," said the 34-year-old Jean-Laudius, who lives under a plastic tarp with his wife and two children near the national palace.

While the government and business leaders hail their appearance as a signal of America's commitment, the visit by two ex-presidents who have played major roles in Haiti's recent political trajectory is also reminding the country of its tumultuous past.

Supporters of ousted President Jean-Bertrand Aristide staged a protest outside the national palace, with about 100 participants, burning tires and demanding the return of their exiled leader.

Clinton and Bush visit as the country struggles to feed and shelter victims of the magnitude-7 quake, which killed an estimated 230,000 people. Another 1.3 million quake survivors are homeless, with many living in camps prone to dangerous flooding in the April rainy season.

The visit aims to spotlight the dramatic need ahead of a critical March 31 U.N. donors conference in New York, where Haitian officials will ask for $11.5 billion in reconstruction help.

Aid was already being announced on Monday.

The Inter-American Development Bank announced it had agreed to forgive its $479 million share of Haiti's $1.2 billion in foreign debt while offering $2 billion in new financing. And the European Union said it will donate euro1 billion ($1.36 billion) in development aid to Haiti in the years ahead.

Monday is Bush's first trip to Haiti. Clinton, who is the U.N. special envoy to the country, has made two visits since the quake and five in the past two years. He also visited as president.

The two former presidents have arguably shaped Haiti's history as much as anyone alive today.

Clinton presided over a refugee crisis born of the 1991 ouster of Aristide, Haiti's first democratically elected president. He returned Aristide to power in 1994 with a force of 20,000 U.S. troops.

Bush is remembered by many Haitians — especially the thousands in Port-au-Prince's teeming slums — as the U.S. leader whose administration chartered the plane that flew Aristide back into exile during a 2004 rebellion.

The nonprofit Clinton Bush Haiti Fund has raised $37 million from 220,000 individuals including Hollywood actor Leonardo DiCaprio, who gave $1 million, and Obama, who among other donations gave $200,000 of his Nobel Peace Prize. About $4 million has gone to such organizations as Habitat for Humanity, the University of Miami/Project Medishare mobile hospital in Port-au-Prince and the U.S. branch of the Irish charity Concern Worldwide. The rest has yet to be allocated.