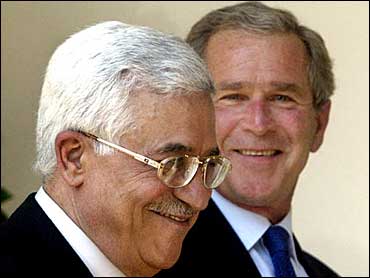 President Bush announced steps Friday aimed at easing poverty among Palestinians, and assured new Palestinian Prime Minister Mahmoud Abbas that the United States was committed to ensuring free and secure states for both Palestine and Israel.

After a meeting with the Palestinian leader, Mr. Bush said two members of his Cabinet will travel to Israel this fall to begin work on bringing jobs and development to Palestinian areas.

He said he told Abbas that the United States would "strive to see that promises are kept," and monitor the progress toward creating a Palestinian state alongside a secure Israel.

"This is the time of possibility in the Middle East," Mr. Bush said. "People in the region are counting on the leaders to seize opportunities for peace and progress."

Abbas, making his first visit to the White House, thanked Mr. Bush for $20 million in direct assistance to Palestinians, and for making "relentless efforts" to pursue peace.

But he said that for peace to work, the Israelis must live up to their commitments about removing Jewish outposts on the West Bank. "All settlement activities must be stopped and the wall must come down," he said.

"A transformation of human conditions on the ground must occur," Abbas said. "Attacks on the dignity of Palestinians must end."

The red-carpet welcome Abbas received at the White House was a sharp contrast to Mr. Bush's shunning of Yasser Arafat for 2½ years.

Their Oval Office meeting and luncheon could help shape the president's strategy for advancing his proposal for establishment of a Palestinian state in 2005 and a peaceful accord with Israel.

Next Tuesday, Israeli Prime Minister Ariel Sharon calls at the White House for another pivotal meeting.

Meanwhile, a top Palestinian official survived an assassination attempt, apparently by fellow Palestinians, as Israeli security forces and volunteers searched for a missing soldier feared kidnapped by Palestinian militants despite a cease-fire.

Back in Washington, Mr. Bush was sympathetic to Abbas' demands, and said he had talked to Sharon about the wall designed to restrict the movement of Palestinians into Israel, which the Palestinians oppose.

"These are all difficult issues," Mr. Bush said. "These are issues where there have been no discussion before, and now we're putting them on the table."

The president said he has growing confidence in the new Palestinian leadership, "because they're people who do what they say."

Mr. Bush praised the Israeli prime minister as "a partner" committed to reaching a peace settlement.

"Together these leaders can bring a bright future to both their people," Mr. Bush said.

The president said Treasury Secretary John Snow and Commerce Secretary Don Evans would visit the region this fall, following up on the creation of a joint U.S.-Palestinian economic development group, which would seek "practical ways" of bringing jobs and development to Palestinian areas.

"Too many years and lives have been squandered by resentment and violence," Mr. Bush said. "The Palestinian people, like people everywhere, deserve freedom, they deserve an honest government and they deserve peace."

In the attack that nearly killed the top Palestinian, Palestinian security said someone fired a rocket-propelled grenade late Thursday at the office of Maj. Gen. Moussa Arafat in the Gaza City compound that includes the central prison and security offices.

An Israeli military source called the incident an internal Palestinian matter, without elaborating.

In a statement, Palestinian security said the explosive missed its target and hit the prison, where 10 prisoners were wounded, several of them seriously. Arafat was not in his office at the time.

There is no Israeli military presence in the area. It was not known who fired the rocket. Among the prisoners are suspected collaborators with Israel, criminals and truce violators.