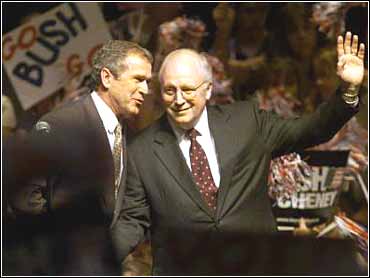 We know you're focused on the midterm elections at the moment - trust me, we are as well - but a pretty striking nugget has just been reported in the New York Times: Former President George W. Bush says in his new memoir that he considered replacing Dick Cheney as his running mate in 2004.

Mr. Bush says in "Decision Points" that the idea came from Mr. Cheney and that he "did consider the offer," according to the Times.

Mr. Bush writes that he considered the idea in order to both "demonstrate that I was in charge" and stop people from thinking that Cheney, not Mr. Bush, was running the White House.

Cheney's replacement would have been former Sen. Bill Frist of Tennessee, the onetime Senate majority leader.

Mr. Bush writes that his vice president "had become a lightning rod for criticism from the media and the left" who "was seen as dark and heartless - the Darth Vader of the administration."

He ultimately decided, of course, to keep Cheney on the ticket. The reason? "I hadn't picked him to be a political asset; I had chosen him to help me do the job. That was exactly what he had done." Plus, he writes, he trusted Cheney and thought of him as a friend.

"Decision Points" will be released next Tuesday, but the Times got an early copy. In the book, the newspaper reports, the former president strongly defends his decision to invade Iraq and authorize harsh interrogation techniques. He also expresses regret about his response to Hurricane Katrina and his nomination of Harriet Miers to the Supreme Court.

The book also reportedly shows that Cheney pushed Mr. Bush toward the Iraq war and details the break between the two over the president's decision not to pardon "Scooter" Libby, Cheney's former chief of staff.

"I can't believe you're going to leave a soldier on the battlefield," an angry Cheney told Mr. Bush after he made the decision, according to the book.

On the lack of weapons of mass distruction in Iraq, Reuters reports, Mr. Bush writes this: "No one was more shocked or angry than I was when we didn't find the weapons. I had a sickening feeling every time I thought about it. I still do."