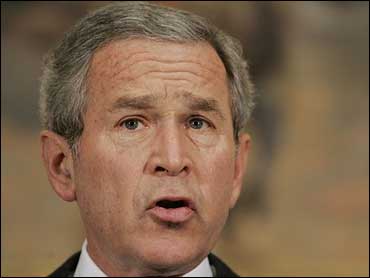 President Bush said Saturday he personally has authorized secret eavesdropping programs in the U.S. more than 30 times since the Sept. 11 attacks and he lashed out at those involved in publicly revealing the program.

"This is a highly classified program that is crucial to our national security," he said in a radio address delivered live from the White House's Roosevelt Room.

"This authorization is a vital tool in our war against the terrorists. It is critical to saving American lives. The American people expect me to do everything in my power, under our laws and Constitution, to protect them and their civil liberties and that is exactly what I will continue to do as long as I am president of the United States," Bush said.

Angry members of Congress have demanded an explanation of the program, first revealed in Friday's New York Times. They also want to know if the monitoring by the National Security Agency violates civil liberties.

Defending the program, Bush said in his address that it is used only to intercept the international communications of people inside the United States who have been determined to have "a clear link" to al Qaeda or related terrorist organizations.

He said the program is reviewed every 45 days, using fresh threat assessments, legal reviews by the Justice Department, White House counsel and others, and information from previous activities under the program.

Without identifying specific lawmakers, Bush said congressional leaders have been briefed more than a dozen times on the program's activities.

First Amendment legal expert Floyd Abrams told CBS News correspondent Randall Pinkston that the president says that not getting congressional approval is mitigated by the fact that he had informed members of Congress.

The president also said the intelligence officials involved in the monitoring receive extensive training to make sure civil liberties are not violated.

Appearing angry at times during his eight-minute address, Bush left no doubt that he will continue authorizing the program.

"I intend to do so for as long as our nation faces a continuing threat from al Qaeda and related groups," he said.

"There is no doubt that this is inappropriate," Republican Sen. Arlen Specter of Pennsylvania, chairman of the Senate Judiciary Committee, declared Friday. He promised hearings early next year.

In a broad defense of the program put forward hours later, a senior intelligence official said the eavesdropping was narrowly designed to go after possible terrorist threats in the United States. The official said that, since October 2001, authorization for the program has been renewed more than three dozen times. On each occasion, the lawfulness of the program is certified by the president's legal counsel and the attorney general. It is then personally signed by Mr. Bush.

Before the program began, the NSA typically limited its domestic surveillance to foreign embassies and missions and obtained court orders for such investigations. Overseas, 5,000 to 7,000 people suspected of terrorist ties are monitored at one time.

"This is Big Brother run amok," declared Sen. Edward Kennedy, D-Mass. Sen. Russell Feingold, D-Wis., called it a "shocking revelation" that "ought to send a chill down the spine of every senator and every American."

Attorney General Gonzales said Mr. Bush is waging an aggressive fight against terrorism, but one that is "consistent with the Constitution."

But he said generally that the government has an intense need for information in the struggle. "Winning the war on terrorism requires winning the war of information We are dealing with a patient, diabolical enemy who wants to harm America," Gonzales said at a news conference at the Justice Department on child prostitution arrests.