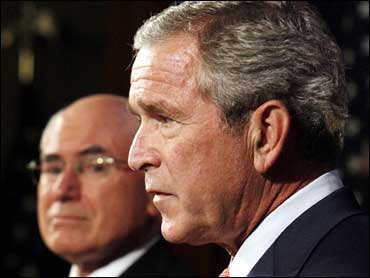 President Bush vigorously defended his troop buildup in Iraq on Wednesday, and got a boost when Australian Prime Minister John Howard said his country's forces there won't change for the foreseeable future.

"Our commitment to Iraq remains," pledged Howard, one of Mr. Bush's few remaining staunch war allies. "This is not the time for any proposals of a scaling down of Australian forces." The two men spoke at a news conference.

Mr. Bush, his voice rising before he had even been asked a question about the war, spoke forcefully about the 30,000 additional American troops he sent to Iraq this year. His decision raised troop levels in Iraq to about 160,000.

"If I didn't think we could succeed, I wouldn't have our troops there," he said.

Mr. Bush said it was important "that we hang in there with the Iraqis and help them."

Australia participated in the U.S.-led invasion of Iraq in 2003 and still has about 1,600 troops in and around the country, 550 of them in combat roles.

Howard is a staunch Iraq war ally, reports CBS News White House correspondent Peter Maer, but he faces a public that is increasingly sour about the Australian troop presence in Iraq. Howard also faces an aggressive challenge in elections expected to be called within three months.

Complete Coverage: America In Iraq: The Road Ahead

President Bush made a surprise, 8-hour stop in Iraq on the way to Australia and filled Howard in on what he learned. Like he does with U.S. lawmakers and coalition partners around the world, he urged that decisions about troops be based on conditions on the ground rather than internal politics.

"The security situation is changing," Mr. Bush said. "There's more work to be done. But reconciliation is taking place."

Mr. Bush returns to Washington this weekend ahead of an expected showdown with war opponents on Capitol Hill, kicked off next week with testimony from the top U.S. commander and diplomat in Iraq and their expected release of a progress report on the fighting.

Administration officials said Gen. David Petraeus, the top U.S. commander in Iraq, and Ambassador Ryan Crocker are recommending that Mr. Bush stand by his current war strategy. The officials also said the president is unlikely to order more than a symbolic cut in troops before the end of the year.

CBS Evening News anchor and managing editor spoke to Petraeus this week about one place the U.S. military says the surge is working; the city of Fallujah in Anbar province. Petraeus told Couric local anger at al Qaeda yielded the success.

Mr. Bush was spending much of Wednesday with Howard ahead of a 21-nation Asia-Pacific summit later in the week.

Later, Mr. Bush and Howard took a 20-minute boat ride across Sydney Harbor's choppy waters to Garden Island, where they had lunch with Australian troops under a tent.

As host of the Pacific Rim forum, Howard has put a declaration on climate change and curbing global warming high on the agenda.

Mr. Bush was expected to push for a new climate change deal more to his liking. But he resisted the idea that he is unconcerned about global warming because of his opposition to the Kyoto Protocol regulating greenhouse gas emissions.

"That's urban legend that is preposterous," the president said.

Polls show Howard, in office for 11 years, trailing opposition leader Kevin Rudd, who has promised to pull combat troops out of Iraq if he wins. Howard has refused to set a deadline.

Howard is the last leader among the major original "coalition of the willing" partners still serving. Among those who paid a political price for standing with Mr. Bush on the war are former Prime Ministers Tony Blair of Britain, Silvio Berlusconi of Italy and Jose Maria Aznar of Spain.

Mr. Bush has voiced strong support for Howard, saying during their news conference that "I wouldn't count the man out." Howard has been equally effusive about President Bush. Still, Mr. Bush meets Rudd on Thursday.

Before their news conference, Mr. Bush and Howard signed a defense cooperation treaty intended to reduce roadblocks hampering the exchange of defense goods and services. The treaty also will help defense-related industries in both countries share technology and assist U.S. and Australian forces to operate in concert.

But Mr. Bush planned to leave before the final weekend session of the APEC meetings to be back in Washington for the Iraq debate and the sixth anniversary of the Sept. 11 terrorist attacks.

Asked about a report that China's military had hacked into the Pentagon's computers, Mr. Bush largely steered away from the question, saying "We understand that we're vulnerable in some systems." China has said the allegations are "groundless."

Instead, Mr. Bush used the opportunity to offer a broad defense of the U.S-China relations ahead of his meeting with Hu, sessions that always feature a long list of difficulties and grievances. "We've got great relations with China, from a diplomatic perspective," Mr. Bush said.