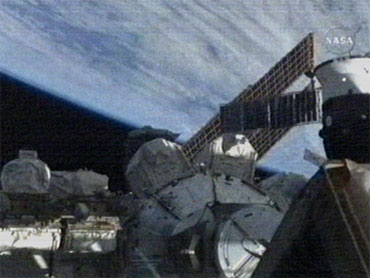 President Bush said Thursday he was "furious" about the Palestinian attack in Israel that killed seven people, including five Americans, but he still believed peace was possible in the Middle East.

"I'm just as angry as Israel is right now," he told reporters in the Oval Office before a meeting with Jordan's King Abdullah. "I'm furious that innocent life was lost. However through my fury, even though I am mad, I still believe peace is possible."

When asked if he supported Israeli military retaliation for the bomb attack in a Jerusalem university cafeteria, Mr. Bush said Israel had a right to defend itself "but I say to all parties involved, we must keep the vision of peace in mind."

Israel is planning to retaliate for a bomb - hidden in a bag and detonated by cell phone - which ripped through a busy cafeteria at Hebrew University Wednesday, killing two Israelis and five Americans, two of whom were citizens of both the U.S. and Israel.

The names of four of the five Americans have been released by Israeli police. They are: Benjamin Blutstein, 25, of Susquehanna Township, Pa.; Marla Bennett, 24, of San Diego, Calif.; David Gritz, 24, who holds dual American-French citizenship; and Janis Ruth Coulter, 36, of Boston, who worked in the school's admissions office in New York and was in Israel on a trip with students.

More than 80 people were also wounded in the second bombing to hit Jerusalem in two days - an attack that shattered the peace in one of the few places where young Jews and Arabs still mixed freely.

Israel Radio reports that the government's Security Cabinet, meeting after the bombing, decided that Israel will retaliate within hours.

Hamas, which has carried out the largest number of Palestinian bombings, claimed responsibility for the bombing during a rally in Gaza City that drew some 10,000 supporters into the streets following evening prayers in the mosques.

"This operation today is a part of a series of operations we will launch from everywhere in Palestine," said a masked Hamas militant, dressed in a green military uniform.

At the request of the masked Hamas speaker, the entire crowd knelt to pray that future Hamas attacks "would succeed against the enemy of God."

In claiming responsibility for the bombing, the Islamic militant group Hamas said it was revenge for the Israeli air raid last week in Gaza that killed the organization's military chief, Salah Shehadeh, and 14 civilians, including nine children.

Israel has tried to end Palestinian attacks by sending troops to impose a curfew in most West Bank cities and towns for the past six weeks. After a lull, there's been an outbreak of shootings and bombings in the past week.

In Boston, hometown of bomb victim Janis Ruth Coulter, a spokesman for her family is expressing shock and grief.

Harry King says Coulter was escorting American students to Israel at the time of the attack.

"Janis Ruth was a wonderful, loving, caring person," says King. "Her faith, to which she converted, was at the core of her being."

The lunchtime blast in the university's Frank Sinatra International Student Center struck a popular student hangout at a school that's been an island of tolerance throughout the nearly two years of Mideast fighting.

Alastair Goldrein, 19, from Liverpool, England, said the cafeteria was a gathering place for students of all backgrounds.

"I was on my way to lunch. There was a huge, huge explosion. Everything shook and then there was this deathly silence," said Goldrein, who has been taking courses in Jewish studies for the past year. "I ran in, there were people lying around wailing, covered in blood. Scenes that are indescribable, clothes and flesh torn apart."

The bag with the bomb was placed on a table in the center of the cafeteria, police said. "It was not a suicide bomber," said police spokeswoman Sigal Toledo. The blast brought down part of the ceiling and blew out windows.

Early Thursday in the town of Beit Jalla, next to Bethlehem, the Israeli military destroyed the family house of Haza Yusuf, who carried out a suicide bombing attack on Tuesday in Jerusalem that wounded seven Israelis, the military said in a statement. Military sources said the destruction was a deterrent measure to show that such actions have a price.

U.N. Secretary-General Kofi Annan Wednesday issued a statement condemning the Jerusalem bombing and calling on Israelis and Palestinians "to end the cycle of violence, revenge and retaliation."

Even before Hamas claimed responsibility, Yassin had linked the bombing to last week's Gaza air strike and said Israel should have expected a revenge attack.

"When Israel bombs a civilian building full of women and children, and kills 15 people this is the response they should expect," he said.

The Palestinian Authority said in a statement that it "absolutely condemns the attack against Hebrew University." However, the Palestinian leadership also said it "considers Israeli Prime Minister Ariel Sharon responsible for this cycle of terror."

In the past few days, Sharon's government had slightly eased tough restrictions placed on Palestinian movements, but the Jerusalem bombing could lead to even tougher measures.

"Israel is fighting a pitched battle against terror, and for the right to walk down the street, take a bus or sit in a cafeteria without the fear of being decimated by Palestinian terrorism," said David Baker of the prime minister's office.