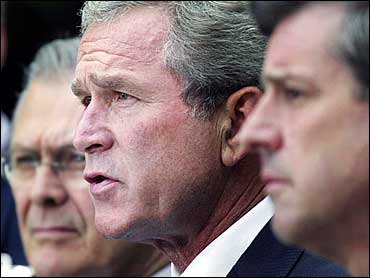 President Bush on Wednesday found further proof of a new era in Iraq in the deaths of Saddam Hussein's sons, Odai and Qusai, who were slain the day before in a U.S. raid.

"Yesterday in the city of Mosul, the careers of two of the regime's chief henchmen came to and end," the president, speaking in the Rose Garden. "Saddam Hussein's sons were responsible for the torture, maiming and murder of countless Iraqis."

"Now more than ever all Iraqis can know that the former regime is gone and will not be coming back," he said.

Details emerged about the raid that killed the sons. It took U.S. forces several hours and three attempts to kill the sons and two other Iraqis, said Lt. Gen. Ricardo Sanchez.