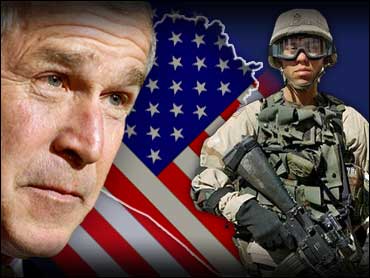 Pleading for patience as U.S. troops again came under deadly attack, President Bush said Thursday the United States will "have to remain tough" in Iraq.

Three months after the fall of Baghdad, insurgents killed at least two servicemen and wounded a third in shootings and rocket-propelled grenade attacks, the military said.

A soldier was fatally shot Wednesday evening near the city of Mahmudiyah, 15 miles south of Baghdad, said Spc. Nicci Trent, a spokeswoman for the military. Another soldier was killed and one wounded in a rocket-propelled grenade attack late Wednesday near Tikrit, 120 miles north of Baghdad, Trent said.

In the city of Ramadi, 60 miles west of the capital, three separate mortar attacks targeted U.S. troops, but there were no reports of casualties, the military said.

Responding to concern about the rising casualty toll, the president said, "There's no question we have a security issue in Iraq, and we've just got to deal with it person to person."

"It's going take more than 90 to 100 days for people to recognize the great joys of freedom and the responsibilities that come with freedom," he said. "It's very important for us to stay the course, and we will stay the course."