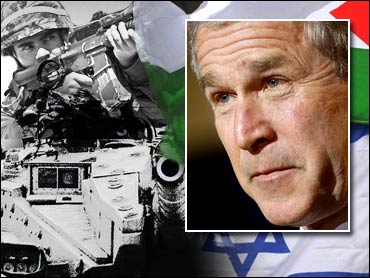 President Bush said Wednesday he is "happy with what we've seen so far" of peacemaking between Israel and the Palestinian Authority, but cautioned that peace still could be stymied by Hamas and others who hate Israel.

Earlier Wednesday, with sirens blaring and bells ringing, Palestinian police moved into the West Bank town of Bethlehem, the second area handed over by Israel under a U.S.-backed Mideast peace plan.

Speaking to reporters at the White House, the president said he was optimistic but that he also recognized the nature of the Middle East.

"There are people there who still hate," he said. "They hate Israel. They hate the idea of peace. They can't stand the thought of a peaceful state existing side by side with Israel, and they're willing to — may be willing to — attack."

Specifically, Mr. Bush cited Hamas, the Palestinian group that has announced it was suspending for three months its attacks on Israelis. "Hamas is not a peaceful organization when they are willing to blow people up and destroy innocent lives," President Bush said.

As the column of about 60 Palestinian police in dark blue uniforms entered Manger Square, reports CBS News Correspondent Robert Berger, bells rang in the Church of the Nativity. The crowd welcoming the police wasn't very large and was fairly somber, because the Palestinians are skeptical that the peace process is going to work. They know that Israeli forces are nearby and could come back at any time.

The handover of the ancient town comes after an upbeat summit between the Israeli and Palestinian premiers boosted hope for an end to 33 months of bloodshed.

Under the agreement, Israel will not launch raids into the city and Palestinian police will prevent terrorist attacks.

Berger reports life Wednesday was returning to normal on the busy streets of Bethlehem. Shops were open. There was not an Israeli soldier in sight.

Police had to walk because there were not enough vehicles to transport all of them, they said.

"Welcome, welcome," a grandmother, Hilal Murra, told them. "It's better to see them in the streets than the Israelis."

As a Palestinian flag was raised over the police station in Manger Square, 16-year-old George Abu Eata smiled.

"It makes me feel proud," he said.

In his remarks, Mr. Bush played on two now-familiar themes: That Palestinian Prime Minister Mahmoud Abbas holds out the promise of a better life for the Palestinian people, and that risks should be taken for peace.

Under the U.S.-backed "road map," Israel would be compelled to give up land to the Palestinians for a state in exchange for intangible promises of peace. As Bush envisions it, a Palestinian state will be established by 2005.

Mr. Bush made no specific mention of the decisions taken by Prime Minister Ariel Sharon to surrender control of security in northern Gaza and in Bethlehem, but said: "We are making progress. But the progress will be ultimately made when the world, particularly that part of the world, firmly and finally rejects terrorist activities."

He also promised again to help the Palestinians with aid and security improvements and said he had telephoned President Hosni Mubarak of Egypt and King Abdullah II of Jordan to ask them "to continue to stay involved in the process."

"The best way to describe it is, we're really happy with what we've seen so far," the president said. "But we're realists in this administration. We understand that there's been years of hatred and distrust, and we'll continue to keep the process moving forward."

Pleased with the performance of Abbas and his new finance minister, Salam Fayad, the administration is considering a resumption of direct aid to the Palestinian Authority — with a big boost to help strengthen its security forces.

For years, the United States has bypassed Yasser Arafat and the Authority and has assisted Palestinians through the United Nations and private groups.

Noting the Palestinians had a new finance minister, Fleischer said, "This president (Bush) would never provide money if he thought the same corrupt leaders would do with the money what they've done in the past."

Arafat, recognized by most of the world as the Palestinians' leader, continues to head the Palestinian Authority. Bush administration officials did not explain how U.S. assistance provided directly to the Authority could be kept out of his hands.

This year, the Palestinians are due to receive $124.5 million from the U.S. Agency for International Development, while the State Department's refugees bureau provides Palestinians with $89 million through the United Nations Relief and Works Agency.

The European Union and the Arab League have given more than $1 billion directly to Arafat and the Authority this year.