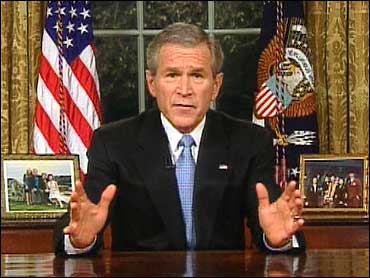 President Bush asserted Sunday night the United States is winning the war in Iraq and issued a plea to Americans divided by doubt: "Do not give in to despair and do not give up on this fight for freedom."

In a prime-time address, Mr. Bush acknowledged setbacks and sacrifice and cautioned there would be more violence and death in the months ahead. "Some look at the challenges in Iraq and conclude that the war is lost and not worth another dime or another day," he said.

He pleaded with Americans to ignore "defeatists who refuse to see that anything is right."

Struggling to build confidence in his policy, the president

held out hopes for withdrawing American forces (video clip)
as Iraqi troops gain strength and experience. "As these achievements come, it should require fewer American troops to accomplish our mission."

The president spoke from the Oval Office, where in March, 2003, he announced the U.S.-led invasion. Nearly three years later, more than 2,150 U.S. soldiers have died, Mr. Bush's popularity has plummeted and about half of Americans think the war was a mistake.

Yet a strong majority oppose an immediate withdrawal of U.S. forces.

Read the full text of President Bush's address to the nation.

Watch key clips of the address
.

Listen to the president's speech (.mp3).

The address came on the heels of four major speeches in which Mr. Bush acknowledged setbacks and surprises in the war and took responsibility for ordering the invasion on the basis of inaccurate intelligence. The admissions were part of a White House effort to address complaints that Mr. Bush lacked a solid strategy for the war and has been oblivious to the violence that Americans plainly see on television.

But, as CBS News correspondent Bill Plante reports, the President remains unapologetic - insisting his decisions were necessary to protect the American people.

"I know that some of my decisions have led to terrible loss and not one of those decisions has been taken lightly," he said. "I know that this war is controversial, yet being your president requires doing what I believe is right and accepting the consequences."

His speech came amid an uproar in Congress over whether he exceeded his powers in conducting the war on terror with a secret eavesdropping program and on a day that Vice President Dick Cheney made a surprise visit to Baghdad.

lashed out at news organizations earlier for making the story public (video)
. Mr. Bush said the report relied on unauthorized disclosure of classified information that "damages our national security and puts our citizens at risk." Disclosure of the program helped generate opposition to a renewal of the Patriot Act in the Senate on Friday.

"The activities I have authorized make it more likely that killers like these 9/11 hijackers will be identified and located in time," Mr. Bush said. "And the activities conducted under this authorization have helped detect and prevent possible terrorist attacks in the United States and abroad."

Sen. Edward M. Kennedy, D-Mass., said in reaction to Mr. Bush's speech: "The President's domestic spying scheme plays fast and loose with the law and our constitutional protections. How can we be credible in helping Iraq form its democratic government when our President acts in conflict to fundamental democratic ideals at home?"

Democrats were scornful even before the president spoke. Regarding a turnover to Iraqi troops, Senate Democratic Leader Harry Reid said Bush "has to tell us how we're going to get there. The people on the ground said there is one battalion that can fight alone."

Arguing against withdrawal, Mr. Bush said that "to retreat before victory would be an act of recklessness and dishonor and I will not allow."

As he has in the past three weeks, Bush acknowledged that missteps and setbacks and took responsibility for ordering the invasion based on faulty intelligence.

But, he said, "Not only can we win the war in Iraq — we are winning the war in Iraq." He said there were only two options for the United States — victory or defeat.

"And the need for victory is larger than any president or political party because the security of our people is in the balance. I do not expect you to support everything I do but tonight I have a request: Do not give in to despair and do not give up on this fight for freedom."

"President Bush persists in pursuing a flawed policy that has not made the American people safer nor made the Middle East more secure," Pelosi said. "It is time for a new direction in Iraq - not more of the same."

The Pentagon hopes to be able to reduce U.S. troop levels as Iraqi security forces become more capable of defending their own country, but it is unclear when that point will be reached. The usual U.S. troop level this year of about 138,000 was strengthened to about 160,000 this fall out of concern for a potential rise in violence during voting in October and December.

"It is also important for every American to understand the consequences of pulling out of Iraq before our work is done," Bush said. "We would abandon our Iraqi friends and signal to the world that America cannot be trusted to keep its word. ... We would hand Iraq over to enemies who have pledged to attack us and the global terrorist movement would be emboldened and more dangerous than ever before."

Acknowledging doubts about his strategy, Bush said, "Some look at the challenges in Iraq, and conclude that the war is lost, and not worth another dime or another day.

"I don't believe that," he said. "Our military commanders do not believe that. Our troops in the field, who bear the burden and make the sacrifice, do not believe that America has lost. And not even the terrorists believe it. We know from their own communications that they feel a tightening noose and fear the rise of a democratic Iraq."

Rep. John Murtha, D-Pa., has said the United States should redeploy all troops as quickly as possible because more than half of the Iraqis people "want us out and almost half of them think we're the enemy."

A new poll shows that a strong majority of Americans oppose an immediate withdrawal of U.S. troops. The AP-Ipsos poll found 57 percent of those surveyed said the U.S. military should stay until Iraq is stabilized.

There is skepticism on Capitol Hill about the U.S. military's ability to sustain forces in Iraq indefinitely and about the ability of Iraqis to carry the load.

"We failed to expand the Army and Marine Corps as many of us wanted to happen a long time ago," said Sen. John McCain, R-Ariz.

Despite the faulty intelligence behind his war decision, Bush said the United States was right to remove Saddam Hussein from power, calling him "a murderous dictator who menaced his people, invaded his neighbors and declared America to be his enemy. Saddam Hussein, captured and jailed, is still the same raging tyrant — only now without a throne."

Pelosi said in a statement that despite admitting his responsibility for the war, President Bush "still does not get it. Iraq did not present an imminent threat to the security of the United States."

But Bush supporters fell in line behind the president, even before his speech.

Mr. Bush spoke openly about war doubts and the loss of American lives in Iraq. "This loss has caused sorrow for our whole nation and it has led some to ask if we are creating more problems than we are solving," the president said.

He answered the question by saying that if the United States were not fighting the terrorists in Iraq, "they would be on the offense and headed our way."

Mr. Bush said the grim news that Americans see on television about the violence and bloodshed "proves that the war is difficult. It does not mean that we are losing. Behind the images of chaos that terrorists create for the cameras, we are making steady gains with a clear objective in view."