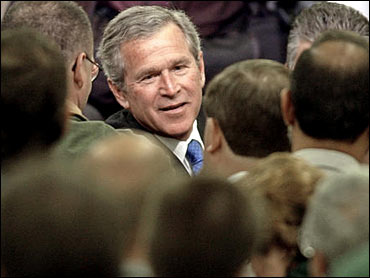 President Bush swooped Thursday into the home state of a fellow Republican who refuses to go along with his drive for more than a half-trillion dollars in new tax cuts, deriding supporters of a "little bitty tax relief package."

Mr. Bush used his ninth trip to politically strategic Ohio to lean on Sen. George Voinovich, a Republican from that state who along with Maine Republican Sen. Olympia Snowe has refused to support tax reductions of more than $350 billion over a decade.

"It's important that Washington respond to some of the problems we face," Mr. Bush said on the shop floor of a ball-bearing factory in this northeast Ohio city. "For the sake of our country, for the sake of the workers of America, Congress needs to pass this jobs growth package soon."

Voinovich says he won't yield to a pressure tactic that seemed to work last time Mr. Bush was selling a tax cut. Mr. Bush visited Ohio in February 2001 to promote that year's $1.6 trillion proposal, and Voinovich — often skeptical about such cuts — announced his support a week later.

Voinovich spokesman Scott Milburn says Voinovich will not back any tax cut over $350 billion without reductions in spending, even in the face of Bush's trip to two Ohio cities.

"It can only be called 'pressure' if the people back home don't support him, or if the president has a snowball's chance in hell getting him to change his position," Milburn said.

In a related development, Mr. Bush got some good news. Orders to U.S. factories for big-ticket manufactured goods, powered by a continued surge in demand for military equipment, rose an unexpectedly sharp 2 percent in March.

Without mentioning Voinovich by name, Mr. Bush took him and other opponents to task for agreeing that some tax cuts are OK but not the amount the president says is necessary to kick-start the lagging economy.

Speaking at a company owned by longtime heavyweight GOP donor W.R. Timken Jr. — and at a private roundtable beforehand with workers and other small business owners — Mr. Bush pushed his plan for at least $550 billion in tax cuts over a decade.

"Some in Congress say the plan is too big," the president said. "It seems like to me they might have some explaining to do. If they agree that tax relief creates jobs, then why are they for a little bitty tax relief package? If they believe tax relief is important for job creation, they ought to join us."

Voinovich himself was absent, something Mr. Bush seemed aware of as he noted "we got a lot of people showing up today" and ticked off a long list of local and congressional politicos in the audience that didn't include the Ohio Republican senator.

Voinovich was to greet Mr. Bush's plane later Thursday as the president was heading to Dayton en route to his second stop. Voinovich kept his distance from the Canton appearance that would focus on the tax cuts and chose not to accompany Mr. Bush on to an event in Lima, Ohio. Aides said the senator had a scheduling conflict.

In Lima, Mr. Bush was to tour the Lima Army Tank Plant, which makes the Abrams M1A2, workhorse of mobile forces that fought in Iraq, and speak on national security, the Iraq war and Iraq reconstruction.

By fusing the economy and national security, the swing mirrors the formula Mr. Bush has employed in other recent trips and foreshadows his re-election strategy.

Mr. Bush plans to wrap up the war in a major address after war commander Gen. Tommy Franks tells him that hostilities are over — a recommendation the White House plans to receive in the next few days. Mr. Bush's address could come as early as next week, said several White House officials.

They are considering venues inside the White House as well as on the road. A more formal address to Congress, proposed by some Republicans with close ties to Mr. Bush, is not as likely.

Separately, Mr. Bush plans to travel to Dearborn, Michigan, on Monday to discuss the future of a newly liberated Iraq. The Detroit suburb is home to one of the nation's largest Arab communities. Along with Ohio, Michigan is an important state for Mr. Bush politically.

On Thursday, however, Mr. Bush almost slipped and made the war-ending declaration ahead of schedule. "Now we have finished a war — in the process of finishing a war — in Iraq," he said.