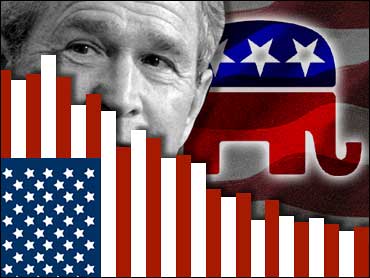 
The great impulse of the punditocracy right now is to look at President Bush's swelling problems with the public and his party in the context of the elections coming up in November and then in 2008. Big mistake.

Short of another disaster on the scale of 9/11, George Bush no longer has the power, credibility or ability to effectively govern for the rest of his term in office. Contrary to what you hear on television, governing remains more important than campaigning. Government is more important than elections — to the extent the two can be differentiated anymore.

Bush's realm of efficacy will be limited to areas where he can make unilateral decisions, mostly in war and foreign policy. The tax cuts that oozed through Congress last week may well be his last "significant" piece of domestic legislation; I put quotations around significant because they are, in fact temporary. The entire menu of Bush tax tinkering is set to expire in 2010 on someone else's watch, an apt metaphor for this administration.

The Bush administration is now locked in a triple-hammer hold that would defeat Houdini.

Public support for this president has evaporated to historic lows. Last week's CBS News/New York Times poll put Bush's approval rating at an embarrassing 31 percent. In this week's ABC News/Washington Post poll, voters trusted Democrats over Republicans to handle all 10 of the major issues the pollsters asked about. That's a new one. The new polling is consistent with a long, relentless erosion of public support.

Faced with his unpopularity, the Republican Party, quite naturally, is fighting. Senate and House Republicans are in almost open warfare. The House is hawkish and loud on immigration policy, the Senate dovish and conciliatory. House Leader John Boehner called Leader Frist's call for a $100 gas rebate "insulting," a week after Speaker Hastert dissed General Hayden, the president's choice for the CIA. In February, the House shafted both the Senate and the House by killing the Dubai ports deal.

On the more distant right flank, the party's Christian soldiers have stopped being such good soldiers. They are furious that Bush and the Republican Congress have delivered lip service but no action on issues like gay marriage, immigration, prayer in school, obscenity standards and abortion.

"I can't tell you how much anger there is at the Republican leadership," Richard Viguerie, a veteran conservative consultant and activist told The New York Times. "I have never seen anything like it."

An influential pocket of conservatives that doesn't have social issues at the front of its agenda is equally irritated and equally vocal. A fine example is Bruce Bartlett, a conservative economist long influential in the party, who has just written a book called "Impostor" that skewers this administration for its deficits and unwillingness to deal with the great looming crises in entitlement programs.

The vaunted brilliance and corporate organization of Rove/Bush Inc. has been pretty much blown away in the second term. Rove is fighting off an indictment. From the Dubai deal to the Harriet Miers death march, the White House's political ear seems to be getting tinnier. Porter Goss' appointment to the CIA was a disaster not just politically but substantively. In his second term, the president has never reached outside his core circle for advisers, staff or ideas.

Will all this lead to a Democratic field day in November? Who knows; and not to be flip, but who cares? Polls show Congress is held in low esteem similar to the president's. Democratic gains would simply lead to continued do-nothingism. And the ramifications for 2008, I believe, are nil. 2008 will be about two people, not the performance of congressional Democrats in 2007 and 2008.

But what is apparent, is that George Bush has at his disposal none — none — of the tools presidents have used to turn bad situations around: public support, party support or skilled statecraft. He's a lame duck less than two years in to his second term. You are not being governed.

Dick Meyer is the editorial director of CBSNews.com.