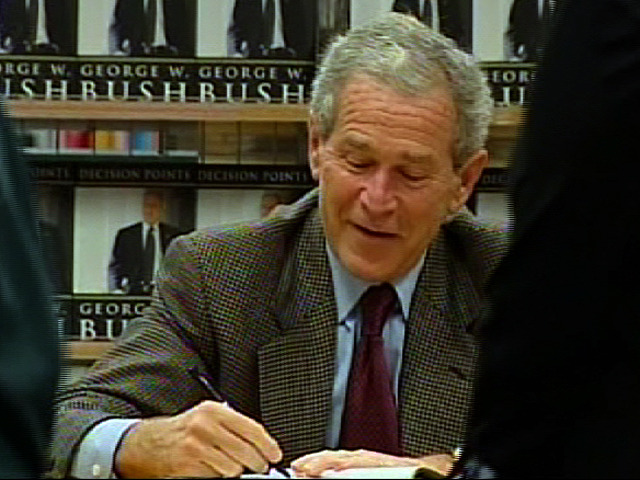 Schroder, who lost power in 2005, takes issue with a passage in the book in which Mr. Bush describes a 2002 meeting between the two men. The former president writes that when he said he was considering the use of force in Iraq, Schroder said, "'What is true of Afghanistan is true of Iraq. Nations that sponsor terror must face consequences. If you make it fast and make it decisive, I will be with you.'"

Mr. Bush writes that he "took that as a statement of support. But when the German election arrived later that year, Schroder had a different take. He denounced the possibility of force against Iraq."

Schroder says Mr. Bush's description of the exchange is false. He said in that meeting and in others he told Mr. Bush that Germany would stand by the United States if Iraq is shown "to have provided protection and hospitality to al-Qaida fighters." He added, however, that it became clear in 2002 that the alleged connection between Iraq and al-Qaida "was false and constructed."

Schroder ultimately opposed the invasion of Iraq. Mr. Bush writes in "Decision Points" that though he continued to work with the German leader on some issues, "as someone who valued personal diplomacy, I put a high premium on trust. Once that trust was violated, it was hard to have a constructive relationship again."

He also writes that he was "shocked and furious" that a German official (then-Justice Minister Herta Daubler-Gmelin) compared him to Hitler for what she cast as trying "to distract people from his domestic difficulties" through war. (Daubler-Gmelin ultimately lost her job for the comment.)

As Der Spiegel notes, Mr. Bush and Schroder's relationship was seriously strained by the Iraq war, which Schroder has called "the mother of all misjudgments." (The former president did offer kind words for Schroder in his memoir for "his leadership on Afghanistan.")

In his memoir "Decisions: My Life in Politics," Schroder wrote that Mr. Bush spoke in "almost Biblical semantics" and gave off the impression "that political decisions are a result of this conversation with God."