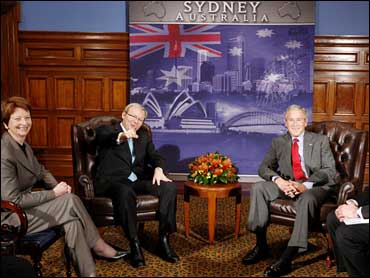 President Bush conferred Thursday with an Australian opposition candidate who is anti-war and could soon be in a position to challenge Bush's Iraq policies.

Mr. Bush met with Labor Party candidate Kevin Rudd, who has vowed to bring Australian troops home from Iraq if elected. That's in sharp contrast to the strong support for the war and Bush's recent military buildup from the current prime minister, John Howard.

Rudd leads Howard by a wide margin in polls for elections expected to be held within the next three months. The White House kept the session with Rudd, held in Mr. Bush's hotel, as low-key as possible.

The president also prepared to deliver a mixed message of encouragement and concern to Chinese President Hu Jintao, the leader of one of the world's fastest-growing economies and one of its most formidable military powers.

Mr. Bush and his aides say he's eager to talk to Hu on Thursday about increasing trade and climate controls and to express satisfaction with Beijing's role in pressing North Korea to agree to disavow nuclear weapons. But he's also ready to discuss product-safety issues following a rash of recalls in the United States, and to register his worries about China's exchange rate policies.

Mr. Bush will urge the Chinese leader to be more aggressive on Iran, raise the issue of jailed dissidents, press Hu on the humanitarian crisis in Darfur and on the treatment of the Dalai Lama, administration officials said. He may even bring up unsubstantiated reports that China's military has hacked into Pentagon computers.

"Our relationship with China is complex," Mr. Bush said Wednesday.

In his meeting with Rudd, Mr. Bush and the Australian opposition party candidate were seated in chairs. There was no public handshake. Only still photographers were permitted into the room.

That contrasts to the extensive coverage of Mr. Bush's sessions with Howard - which included a picture-taking session during a morning meeting, a news conference, a boat ride, the two leaders' lunch with Australian troops, and Mr. Bush's arrival for dinner with the prime minister.

Rudd later described his 45-minute meeting with Mr. Bush as warm, but refused to give details. "We had a wide-ranging good-natured, very open discussion," he told Australian reporters. "We talked at length about the history of the alliance between Australia and the United States and about Iraq, Afghanistan and climate change."

Rudd said he gave Mr. Bush the same description of his Iraq position - "well-known to Australians" - as he had to Vice President Dick Cheney earlier this year.

"I understand and accept fully that President Bush and Mr. Howard are good friends. That's just the reality," he said. Asked if he thought he could develop a similar friendship with Mr. Bush, Rudd replied: "I'm a friendly sort of guy".

White House spokesman Gordon Johndroe said: "President Bush had a good session with Mr. Rudd. They exchanged views on issues in Asia, the upcoming APEC and the war on terror, including Iraq."

After Howard, the host of this year's 21-nation Asia Pacific Economic Cooperation forum, Hu is the first foreign leader Bush was meeting with on the sidelines of the annual conference, underscoring the importance the U.S. places on China's relationship with the region.

Hu arrived in Sydney on Wednesday and meat will met with Howard himself before his late-afternoon Thursday meeting with Mr. Bush. China and Australia are seeking closer economic and defense ties.

At a news conference with Howard, Hu defended the safety of Chinese food and products, saying 99 percent of its exports from 2004 to 2007 were up to standard. Still, he said that China had a nationwide campaign to implement measures to "improve product safety and quality."

"If there was any wrongdoing on the part of Chinese companies, we'll hold those companies accountable according to law," he said. He said that food and product safety was not just a Chinese issue but one "facing the whole international community."

Mr. Bush suggested China could help reduce trade imbalances and allow its currency to be more responsive to market influences.

"We still have got a huge trade deficit with China, which then causes us to want to work with them to adjust - to let their currency float," Bush said. "We think that would be helpful in terms of adjusting trade balances."

Dan Price, a presidential international economic adviser, said "a whole range of economic issues, bilateral issues with China, are obviously on the table, and would naturally be subjects of discussion between the two presidents." Exchange rates are "a very important issue" to both countries, he said.

Analysts say China's yuan is undervalued, giving Chinese exporters an unfair advantage despite China's steps to revalue the currency by 2.1 percent in 2005 and then letting it appreciate a further 7.3 percent.

U.S.-Chinese tensions have also grown over the issue of defective products. Just Wednesday, Mattel Inc. announced a third major recall of Chinese-made toys in little more than a month because of excessive amounts of lead paint. The world's largest toy maker said the move affects about 800,000 toys.

China has denied reports that its military hacked into a computer system in the office of Defense Secretary Robert Gates in June. Bush largely sidestepped the question, but said, "We understand that we're vulnerable in some systems." The Financial Times, citing unidentified officials, said China was behind the attack that forced the Pentagon to temporarily take down the network. China has called the allegations "groundless."