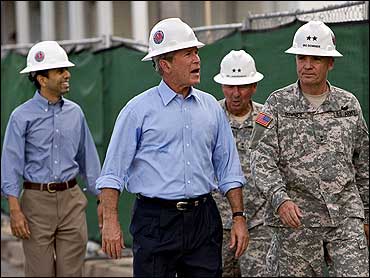 Hurricane Katrina not only pulverized the Gulf Coast in 2005, it knocked the bully pulpit out from under President George W. Bush, according to two former advisers who spoke candidly about the political impact of the government's poor handling of the catastrophic natural disaster.

Dan Bartlett, former White House communications director and later counselor to the president, said: "Politically, it was the final nail in the coffin."

Their comments are a part of an oral history of the Bush White House that Vanity Fair magazine compiled for its February issue, which hits newsstands in New York and Los Angeles on Wednesday, and nationally on Jan. 6. Vanity Fair published comments by current and former government officials, foreign ministers, campaign strategists and numerous others on topics that included Iraq, the anthrax attacks, the economy and immigration.

Lawrence Wilkerson, top aide and later chief of staff to former Secretary of State Colin Powell, said that as a new president, Bush was like Alaska Gov. Sarah Palin, the 2008 Republican vice presidential nominee whom critics said lacked knowledge about foreign affairs. When Bush first came into office, he was surrounded by experienced advisers like Vice President Dick Cheney and Powell, who Wilkerson said ended up playing damage control for the president.

"It allowed everybody to believe that this Sarah Palin-like president - because, let's face it, that's what he was - was going to be protected by this national-security elite, tested in the cauldrons of fire," Wilkerson said, adding that he considered Cheney probably the "most astute, bureaucratic entrepreneur" he'd ever met.

"He became vice president well before George Bush picked him," Wilkerson said of Cheney. "And he began to manipulate things from that point on, knowing that he was going to be able to convince this guy to pick him, knowing that he was then going to be able to wade into the vacuums that existed around George Bush - personality vacuum, character vacuum, details vacuum, experience vacuum."

On other topics, David Kuo, who served as deputy director of the White House Office of Faith-Based and Community Initiatives, disputed the idea that the Bush White House was dominated by religious conservatives and catered to the needs of a religious right voting bloc.

"The reality in the White House is - if you look at the most senior staff - you're seeing people who aren't personally religious and have no particular affection for people who are religious-right leaders," Kuo said.

"In the political affairs shop in particular, you saw a lot of people who just rolled their eyes at ... basically every religious-right leader that was out there, because they just found them annoying and insufferable. These guys were pains in the butt who had to be accommodated."