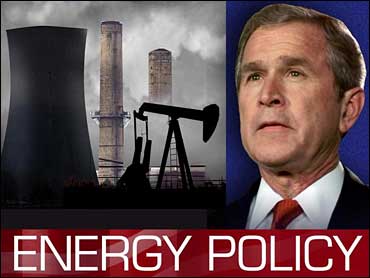 When it comes to the soaring price of gasoline, even President Bush is prone to wishful thinking, reports CBS News White House Correspondent Mark Knoller.

"I wish I could simply wave a magic wand and lower gas prices tomorrow. I'd do that," the president said Wednesday in a speech to the U.S. Hispanic Chamber of Commerce. "Unfortunately higher gas prices are a problem that had been years in the making."

Short of a magic wand, Mr. Bush is demanding that Congress complete action before its August recess on the energy plan he put forward nearly four years ago.

"An energy bill wouldn't change the price at the pump today. I know that and you know that," Mr. Bush said. But, he added, "It will help us make better use of the energy supplies we have."

Mr. Bush spoke as the House began considering a broad energy bill that includes $8.1 billion in tax breaks, mostly for energy companies, and would open the Arctic National Wildlife Refuge in Alaska to oil development.

"The summer travel season is fast approaching, gas prices on the minds of millions of Americans," he said. "Members of Congress can send an important signal that they are serious about solving America's energy problems by getting a bill to my desk before the summer recess."

Although the House bill is focused in the long term on diversifying the nation's energy supply and increasing production, it is unlikely to provide immediate relief from prices at the pump, which the Energy Department says are likely to remain well above $2 a gallon through the busy summer driving season.

"Today millions of American families and small businesses are hurting because of higher gasoline prices," Mr. Bush said. "If you're trying to meet a payroll or trying to meet a family budget, you know that even small changes at the pump can have a big impact on your bottom line."

Many Democrats have criticized the legislation for doing little to reduce energy use or address the soaring crude oil and gasoline prices. Republicans defended it, saying it would help diversify U.S. energy production by promoting clean coal, nuclear energy, and expansion of imported liquefied natural gas, or LNG.

Democrats were expected to try to strip the Alaska refuge provision from the bill and include measures aimed at getting automakers to boost automobile fuel economy. GOP leaders said they were confident that both attempts would be turned back.

While the House was expected to endorse the broad energy blueprint on Thursday, GOP leaders acknowledge a battle in the Senate where energy legislation has been stymied in the past in disputes over drilling in the Alaska wildlife refuge and protecting makers of a gasoline additive, MTBE, from product liability lawsuits.

The Democratic National Committee on Wednesday accused the Bush administration of using high gas prices to push its energy bill through Congress while giving the appearance of doing something to halt rising prices at the pump.

"The only thing rising faster than gas prices right now is the influence that the energy industry wields over the Republican Party," DNC spokesman Josh Earnest said in a statement. "For Republicans to use public anxiety over energy prices to push a bill written by and for oil companies is politics at its worst. American families need leaders who will work to lower gas prices, not work to increase energy industry profits."