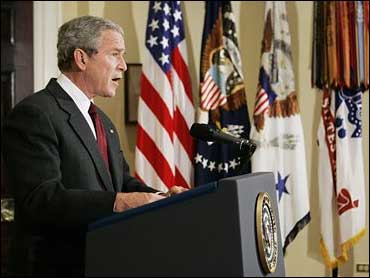 President Bush said Sunday that pulling out of Iraq would signal to the world that America cannot be trusted to keep its word and that the elections in the Middle East nation mean the United States has "an ally of growing strength."

Pulling out "would hand Iraq over to enemies who have pledged to attack us," he said in excerpts of prepared remarks from a speech to the nation.

Mr. Bush's Oval Office address tops off an 18-day span in which the president made five speeches conceding setbacks in Iraq. At the same time, he is outlining a strategy he says will enable the Iraqi people to establish a stable political system and a strong defense capable of quelling a stubborn insurgency.

(CBS will broadcast the speech live at 9 p.m. eastern time. Bob Schieffer will anchor from Washington.)

The speech comes at a time when the president has sparked a national furor over security versus civil liberties. Mr. Bush acknowledged Saturday that on more than 30 occasions he secretly authorized the National Security Agency to spy on Americans and other residents and defiantly vowed to continue such domestic eavesdropping "for as long as our nation faces a continuing threat from al Qaeda and related groups."

Mr. Bush's unusually frank admission, made in his weekly radio address, came amid a bipartisan uproar in Congress after The New York Times revealed the secret NSA program in Friday's editions.

CBS News correspondent Bill Plante reports Mr. Bush lashed out at news organizations for making the story public. Mr. Bush said the report relied on unauthorized disclosure of classified information that "damages our national security and puts our citizens at risk." Disclosure of the program helped generate opposition to a renewal of the Patriot Act in the Senate on Friday.

"The activities I have authorized make it more likely that killers like these 9/11 hijackers will be identified and located in time," Mr. Bush said in a rare live address. "And the activities conducted under this authorization have helped detect and prevent possible terrorist attacks in the United States and abroad."

The New York Times account said the NSA secretly monitored, without court approval, international phone calls and e-mail messages that originated in the United States. The newspaper said the NSA eavesdropped on hundreds and perhaps thousands of U.S. citizens and other U.S. residents or tourists.

The president ordered the NSA to act without approval from the Foreign Intelligence Surveillance Act court, a special federal tribunal created in 1978 to authorize domestic counterterrorism operations.

"I don't understand why that wasn't used," said Carl Tobias, a law professor at the University of Richmond School of Law. "Congress has clearly provided for what was going on. It seems to be that that procedure should have been followed.

"It's important not to view that activity in a vacuum," he said. "There is a whole number of actions that the president has taken premised on unilateral executive authority that many observers find problematic."

Bush supporters fell in line behind the president.

Mr. Bush said he acted within the Constitution and said he drew his authority from his role as commander in chief and from Congress' Joint Authorization for the Use of Military Force, passed days after the Sept. 11, 2001, attacks.

The resolution gave the president broad authority to hunt down the Sept. 11 terrorists and to prevent further terrorist attacks.

Plante reports that as the debate at home has sharpened, so has the president's tone. Saturday, he demanded the extension of the Patriot Act, the anti-terrorism law that is set to expire on Dec. 31. The law, passed a month after the Sept. 11, 2001, attacks, made it easier for the FBI and CIA to share intelligence and gave federal authorities more power to conduct secret searches, tap phone calls, monitor e-mails and seize personal records ranging from financial documents to library lending lists.