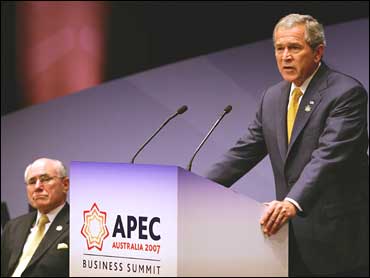 Friday may have ended on a positive note for the APEC Summit, but it was a bad day for President George W. Bush.

Following his awkward on-camera meeting with South Korean President Roh Moo-hyun, during which Roh chided Mr. Bush on "not being clearer" about his negotiations with North Korea, Mr. Bush gave a speech to business leaders at a sidebar event of the Asia-Pacific Economic Cooperation forum.

His appearance at the Sydney Opera House began inauspiciously: Mr. Bush started 10 minutes late, to allow APEC workers to hustle people out of the theater's balcony to fill empty portions of the orchestra section below that were visible on camera.

Once on stage, he'd only reached the third sentence when he committed his first gaffe:

"Thank you for being such a fine host for the OPEC summit," Mr. Bush said to Australian Prime Minister John Howard.

Unfortunate in that he was addressing attendees at APEC, the annual meeting of leaders from 21 Pacific Rim nations, not OPEC, the cartel of 12 major oil producers.

Mr. Bush quickly corrected himself. "APEC summit," he said forcefully, joking that the confusion was because Howard had invited him to the OPEC summit next year (though neither Australia nor the United States is an OPEC member).

The president's next goof went uncorrected, at least immediately. Talking about Howard's visit to Iraq last year to thank his country's soldiers serving there, Mr. Bush referred to them as "Austrian troops" - though the official text released by the White House and posted on whitehouse.gov fixed it to "Australian."

After his speech, Mr. Bush confidently headed out - the wrong way.

He strode away from the lectern on a path that would have sent him over a steep drop. Howard and others saved him, redirecting the president to center stage, where there were steps leading down to the floor of the theater.

The audience remained quiet throughout the president's remarks, applauding only when he was finished.

The summit was conducive to at least a preliminary agreement on a declaration to fight climate change, overcoming squabbling between rich and poor nations about targets on emissions.

The draft statement calls for the need "to slow, stop and then reverse" climate change.

It sets a target to reduce energy intensity 25 percent by 2030 — a demand by Australia, backed by the United States.

It also affirmed that climate change negotiations should take place under United Nations' auspices, a demand of China and other developing nations.

The joint statement, drafted by officials over four days, now goes to the 21-member nations' leaders on Saturday, who must give their approval.

If Mr. Bush, Chinese President Hu Jintao and the 19 other leaders agree to the draft statement, it would mark a victory for Australia and the U.S., which have tried to persuade China and other developing nations to agree to commit to firmer goals to tackle climate change.

"Everybody cannot get everything, but everybody did not lose too much," said Salman Al-Farisi, an Indonesian official involved in the talks.

APEC includes four of the largest emitters of the greenhouse gases that cause global warming - the U.S., China, Russia and Japan. So an agreement among APEC could potentially affect the wider international debate on fighting climate change.

That the leaders will strike an agreement is almost certain, because the stakes were too high to walk away with nothing, officials said earlier this week. But it was uncertain whether the drafters' compromise would be acceptable to the leaders.

To strike the accord, negotiators agreed to set a target to reduce "energy intensity" - the amount of energy needed to produce economic growth, said Indonesia's Al-Farisi.

Howard has previously called for reducing energy intensity 25 percent by 2030 - a goal a Southeast Asian official, who spoke on condition of anonymity, said was included in the draft.

In return for the reduction target, Al-Farisi said, the statement would call for "common but differentiated responsibilities." The phrase means richer nations will have to bear more of the financial and other costs in cutting the carbon emissions that contribute to global warming.

Ong Keng Yong, secretary-general of the 10-member Association of Southeast Asian Nations, confirmed that agreement had been reached among officials, and the final draft was ready to be handed to the leaders.

Aside from climate change, leaders were also expected to issue a statement urging renewed efforts to conclude the foundering Doha round of global trade talks.

The Summit will end on a more raucous note Saturday, as a major demonstration - at least 20,000 people are expected - will be held against Mr. Bush, the Iraq War and corporate interests. About 1,000 protestors got an early start Friday, scuffling with police near a hotel where some summit delegates are staying.

One group of protestors looking for exposure had little to hide in Sydney's Hyde Park. "Bums not bombs" ("bum" in this part of the world meaning rear end) staged a cheeky protest, dropping trousers to reveal the words "No" and "War" painted on adjoining buttocks.

Other demonstrators protested nuclear power, a uranium deal signed between Australia and Russia, the government in Myanmar and China's record on human rights.