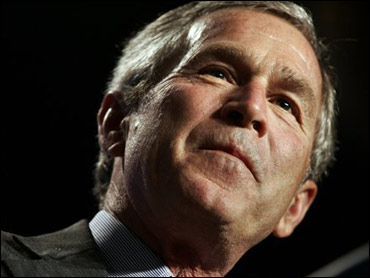 Bush outlined his initiatives in his second energy speech in a week, reflecting growing concern in the White House that high energy prices are beginning to slow economic growth and undercut the president's approval rating.

In advance of the speech, the White House conceded that Mr. Bush's proposals would not offer any relief in the short-term from skyrocketing prices, reports CBS News Correspondent Bill Plante.

The president hammered this point home in his remarks. Speaking to small business leaders, Bush lamented that he was powerless to cut gas prices. "I wish I could," he said. "If I could, I would."

"This problem did not develop overnight and it's not going to be fixed overnight. But it's now time to fix it," he said. Bush said the problem is that energy supplies are not growing fast enough to meet the growing demand in the United States and in other countries.

"See, we've got a fundamental question we got to face here in America," Bush said. "Do we want to continue to grow more dependent on other nations to meet our energy needs? Or, do we need to do what is necessary to achieve greater control of our economic destiny?"

America has not ordered a new nuclear power plant since the 1970s. Bush said that France has built 58 plants in the same period and today France gets more than 78 percent of its electricity from nuclear power.

"It's time for America to start building again," he said.

Senate Democratic leader Harry Reid called Bush's initiatives "little more than half measures and wrongheaded policies that will do nothing to address the current energy crisis or break the stranglehold that foreign oil has on our nation."

He said Senate Democrats will offer a much larger package of tax incentives — double the $8 billion approved by the House — and funnel more of the money to renewable energy sources and energy efficiency measures.

Bush urged using closed military bases as sites for new oil refineries. The Energy Department is being ordered to step up discussions with communities near such bases to try to get refineries built. He said the United States has not built a new oil refinery since the 1970s.

Bush also called on Congress to provide a "risk insurance" plan to insulate the nuclear industry against regulatory delays if it builds new nuclear power plants. And he endorsed giving federal regulators final say over the location of liquefied natural gas (LNG) import terminals. LNG terminal projects have been stymied in some regions by local opposition, even though the need for more LNG imports has been widely accepted.

As he did last week, he called on Congress to give him an energy bill by this summer.

Sen. Pete Domenici, R-N.M., who is trying to put together an energy package that can pass the Senate, said he welcomed some of the president's proposals. He is "making it clear that energy remains a top priority of this president," said Domenici in a statement.

Bush's support for giving the federal government clear authority in locating LNG terminals comes after the House included such a provision in the energy bill it passed last week. Some lawmakers strongly opposed the measure, arguing it would deprive states and communities of a say in locating LNG import terminals, even in heavily populated areas.

Nuclear power accounts for about 20 percent of the country's electricity. Some utilities have expressed interest in building a new reactor, perhaps as early as 2010, but want assurance of a smooth regulatory process to get financing.

To address their concern, the president is directing the Energy Department to develop a federal "risk insurance" plan that would kick in if there were lengthy delays in licensing a new reactor. Such a program would need congressional action, and White House officials would not speculate on its cost.

The president also wants the Energy Department to discuss with local communities the possibility of building refineries on closed military sites. A shortage of U.S. refining capacity has been blamed in part for the high gasoline prices, most recently by Saudi Arabia's Crown Prince Abdullah at a meeting this week with Bush.

The president's call for a tax credit for gas-electric hybrid automobiles and for use of clean diesel is similar to a proposal in his budget earlier this year. The hybrid tax break was left out of the energy bill passed by the House last week.

Such a credit would provide $2.5 billion in tax incentives over 10 years, White House officials said. Consumers would get a credit, up to $4,000, depending on the level of a vehicle's fuel efficiency, if they purchase a hybrid or clean-diesel vehicle.

The president's proposals were outlined late Tuesday by senior White House officials, speaking in general terms and on condition of anonymity in advance of the remarks.