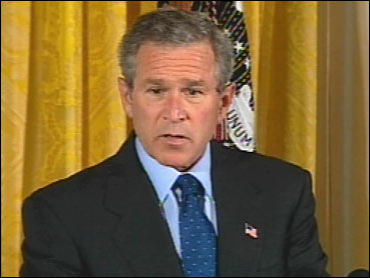 Of the first 42 American presidents, Jimmy Carter and Bill Clinton are the only ones to make extended visits to Africa.

On Monday, it will be George W. Bush's turn.

The president is going to five countries next week - Senegal, South Africa, Botswana, Nigeria and Uganda - on a journey in which he will emphasize the positive he sees on a continent laden with the negative: chronic underdevelopment, misrule, health crises and a penchant for destructive conflict.

Four of the five - Senegal, South Africa, Botswana and Nigeria - have established stable democracies. Uganda has perhaps the best record in Africa for reducing the HIV/AIDS infection rate.

"We believe that this can be a decade of unprecedented advancement for freedom and hope and healing and peace across the African continent," Bush said in a speech last week.

"On the path to freedom, and with the friendship of the United States and other nations, Africa will rise, and Africa will prosper," he said.

His speech seemed to some to underestimate the depth of the continent's problems. He barely mentioned corruption, one of Africa's most troublesome issues.

Bush foreshadowed the issues he will highlight on the trip, mentioning some of his pet initiatives. He touted in particular his proposed 50 percent increase in foreign aid under what he calls the Millennium Challenge Account (MCA).

Bush initially set forth the proposal in March 2002 but not much has happened since then. No funds have been authorized as yet. Beyond that, full funding of the account - $5 billion - would not occur until 2006.

The administration has requested $1.3 billion in Millennium Challenge money for 2004. And even assuming Congress goes along, it is not at all clear what percentage will be earmarked for African countries, which must compete for these funds with other regions.

A more immediate issue for Bush is whether humanitarian U.S. intervention is warranted in Liberia, where years of civil war have displaced 1 million people. The international clamor for the United States to lead a peacekeeping force to Liberia has increased steadily in recent days.

With reference to Liberia as well as war-torn Congo, Bush said in his speech that the establishment of peace and security on the continent is a priority U.S. goal.

But Salih Booker, executive director of Africa Action, said Bush's claim lacks credibility. The president, he said, has shown little interest in solving the conflict in Congo, where 3.3 million people have died since 1998 in a war fueled by ethnic hatreds, competition for resources and outside intervention.

"The U.S. has been unwilling to bring pressure to bear," Booker said.

But Booker gives Bush credit for his overall approach to Africa. Bush, he said, "is trying to position himself as the most committed president over all of his predecessors."

Indeed, the centerpiece of Bush's policy is the fight against AIDS. In his speech, Bush alluded to the five-year, $15 billion anti-AIDS war chest - for use mostly in Africa - that he signed this spring.

"This is one of the largest public health projects in history. America is proud to be a part of this cause, and we are absolutely determined to see it through until we have turned the tide against AIDS in Africa," he said.

On trade, Bush sees the glass more half full than half empty. He noted approvingly that reduced restrictions on U.S. imports from Africa permitted a 10 percent increase to $9 billion last year.

He did not mention that the most of the benefits accrued to only a few African countries. And two-way trade represents only an infinitesimally small fraction of U.S. trade worldwide. Oil accounts for the great bulk of U.S. imports from Africa; three countries in particular dominate - Nigeria, Angola and Gabon.