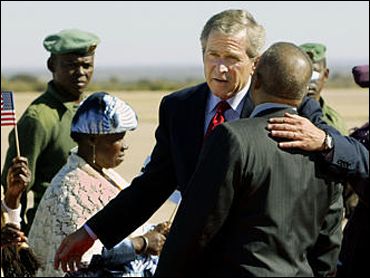 Visiting a country with the world's highest AIDS infection rate, President Bush said Thursday that the disease is "the deadliest enemy Africa has ever faced" and promised that the United States will help meet the challenge.

"The people of this nation have the courage and resolve to defeat this disease and you will have a partner in the United States of America," Mr. Bush told Botswana's President Festus Mogae in a toast kicking off a festive luncheon.

"This is the deadliest enemy Africa has ever faced, and you will not face this enemy alone."

Mr. Bush's brief remarks were greeted with chants of "Pula! Pula!" which means "all good things."

The third stop on the president's journey was meant as a salute to what the U.S. regards as a model of democracy and good governance in Africa, reports CBS News White House Correspondent Mark Knoller, but the visit is also intended by President Bush to be a show of American concern for Botswana, where more than one in three adults have the virus that causes AIDS.

The president came to the country near the southern tip of Africa bearing a $15 billion plan to combat AIDS, and he received a raucous welcome upon his arrival. Dozens of children waving small American and Botswanan flags danced and waved, and scantily clad men and women performed tribal dances.

Mr. Bush stood at the edge of the scene smiling and waving, then plunged into a crowd of hundreds of people, many jumping up and down, offering both hands for handshakes.

Later, during a meeting with Mogae, President Bush said his five-day trip to Africa was meant to demonstrate "that we're not only a powerful nation, we're also a compassionate nation."

"The average citizen cares deeply about the fact that people are dying in record numbers because of HIV/AIDS," Mr. Bush told reporters. "That's really the story that I want the people of Africa to hear and I want the people of America to know that I'm willing to take that story to this continent."

It was the third country on his five-nation tour of a continent battling hunger and suffering from civil unrest.

The president spent Wednesday in South Africa, a country about twice the size of Texas, that the United States views as a model of stability on the continent.

Botswana, too, is rich and diamonds and has a stable government. Its status as a model of democracy and economic strength in Africa is one of the reasons it was chosen by the White House to be one of Mr. Bush's stops — and earned Mr. Bush's praise at lunch.

"Botswana is known for the strength of your democracy and for the vigor of your economy," he said.

But the country is facing a potential AIDS disaster.

Fourteen countries in Africa and the Caribbean account for nearly half of the world's HIV infections, but Botswana is especially hard-hit. More than 38 percent of its adult population is infected with HIV. The life expectancy is 39.9 years for its citizens ages 15-49.

Mogae has adopted Africa's most aggressive response to the disease, including a promise to provide AIDS medicines free of charge to all who need them. That program is funded in part by the Bill and Melinda Gates Foundation.

"All gains are being reversed by HIV/AIDS," he told The Associated Press.

Trade is another issue being promoted by Mr. Bush. In Gabarone, he toured exhibits at a trade hub created last year by the U.S. Agency for International Development.

A highlight of his day trip to Botswana was to be an hour-long tour of the Mokolodi Nature Reserve, created in 1994 on donated land to promote wildlife conservation and environmental education for the country's children.

Occupying about 20 square miles of land just outside Gaborone, the reserve provides a home free of predators for elephant orphans and endangered rhinos, as well as zebra, giraffes, warthogs and steenboks. Guests can pet two resident cheetahs raised from infancy at the park.

Mr. Bush opened his first presidential tour of sub-Saharan Africa in Senegal on Tuesday. Next up are stops in Uganda on Friday and Nigeria on Saturday. He returns to the White House late Saturday.

The trip is giving the president a close-up view of some of the continent's protracted crises, and he has been dogged by the question of whether to send U.S. peacekeepers to Liberia.

On Wednesday, the president remained noncommittal about whether to send U.S. soldiers, but pledged that he will not allow American forces to become stretched too thinly around the globe.

President Bush has invited U.N. Secretary-General Kofi Annan to the White House on Monday, along with the head of U.N. peacekeeping missions, a U.N. official in Washington said. Annan, of Ghana, has said in the past that he who would like to see the United States lead a multinational peacekeeping force in Liberia.

Mr. Bush also talked Wednesday about Sudan, where peace talks are to resume in July. Civil war broke out there in 1983, and a cease-fire was extended last month. Former Sen. John Danforth was returning to the region in an effort to help end the war, the president said.