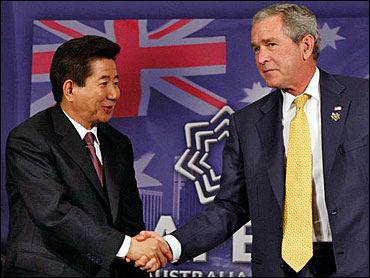 The comment came in a testy exchange between the two leaders on the sidelines of a Pacific Rim summit, after they held talks dominated by the international standoff over communist North Korea's pursuit of nuclear weapons.

In front of television cameras, Mr. Bush and Roh agreed there had been progress in trying to resolve the issue, but then had a back-and-forth that was remarkable in the diplomatic world of understatement and subtlety.

Roh pushed Mr. Bush to be "clearer" about his position on an official end to the 1950-53 Korean War. The two Koreas were divided by the conflict, which ended in a truce, not a peace treaty, meaning they are still technically at war. The U.S. also has no peace treaty with the North.

The leaders' tone remained light, but Mr. Bush responded firmly: "I can't make it any more clear, Mr. President. We look forward to the day when we can end the Korean War. That will happen when Kim Jong Il verifiably gets rid of his weapons programs and his weapons."

White House officials tried to downplay the incident, insisting there was no tension, reports CBS News correspondent Peter Maer from Sydney. But Mr. Bush appeared peeved, cutting off the discussion with a terse, "Thank you, sir."

Mr. Bush also talked about missile defense with Russian President Vladimir Putin, who like Mr. Bush was in Sydney for the Asia Pacific Economic Cooperation forum. Putin - who bitterly opposes a U.S. plan to base a missile defense system in Eastern Europe - said that the two presidents agreed for the countries' technical experts meet again to a Russian-backed alternative for a joint system; Bush did not comment.

The U.S. president also lunched with Southeast Asian leaders, inviting them to his Texas ranch for summit later this year.

In a speech to business leaders meeting alongside APEC, Mr. Bush defended his policies in Iraq and urged Asia-Pacific nations to keep up the fight against terrorism. He also urged the region to lead the way toward a worldwide trade agreement and cooperate on tackling global warming.

The awkward moment with Roh came later Friday, when the two leaders each made statements to reporters after their meeting.

"I might be wrong. I think I did not hear President Bush mention a declaration to end the Korean War just now," Roh said through an interpreter. "Did you say so, President Bush?"

Roh pressed on: "If you could be a little bit clearer," he said, prompting an annoyed look from Mr. Bush.

Under a deal reached in February after years of negotiations, North Korea agreed to relinquish its nuclear programs. In return, Washington agreed to open talks on normalizing relations with the North and explore removing a terrorism designation for Pyongyang.

North Korea shut down its main nuclear reactor in July, and U.S. officials say Pyongyang has agreed to disable its nuclear programs by the end of this year. But Washington is suspicious the North may renege on the deal.

National Security Council spokesman Gordon Johndroe downplayed the awkward Roh-Bush exchange, saying "there was clearly something lost in translation during the photo op."

Washington and Seoul agree on the steps Pyongyang must take before there can be a full peace agreement, he said.

In his earlier speech, Mr. Bush said nations must deploy both military might and democratic ideals to turn the tide against extremists.

"Pressure keeps the terrorists on the run, and when on the run, we're safer," he said. "We must be determined, we must be focused and we must not let up."

On climate change, the top agenda item at APEC, Bush acknowledged that some countries feared the United States was trying to construct a successor to the U.N.'s Kyoto Protocol outside of international efforts already under way.

"We agree these issues must be addressed in an integrated way," he said. "We take climate change seriously in America."

The U.S has called for a Sept. 27-28 conference in Washington of the 15 biggest polluters. A broader conference will be held at the U.N. in New York on Sept. 24.

The high-level discussions at APEC could shape talks at a U.N. conference in December in Bali, Indonesia, that will start to chart a successor to Kyoto.