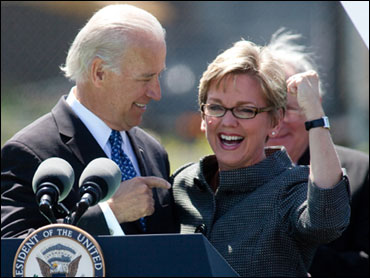 President Bush is sending a team of military experts to Africa to assess whether sending U.S. troops to Liberia would help bring stability to the war-torn nation.

White House press secretary Ari Fleischer said the team would "work with nations in the area" to determine the best approach to calming the West African country and to decide whether American troops should be sent here as part of an international peacekeeping force.

He cautioned, however, that "there still is no decision made by the president" on whether to commit U.S. troops — and that the timing of his decision would not be "guided by the artificial deadline deadline of his trip to Africa."

But he said that information that the White House gets from the Pentagon assessment team will help Bush make that decision.

"If he decides troops were to be sent, it's important to do all the due diligence," says Fleischer.

The announcement came just a few hours after Liberian President Charles Taylor said he would step down, but only after an international peacekeeping force is deployed.

"It makes a lot of sense for peacekeepers to arrive in this city before I transit," Taylor told a meeting of Liberian clerics in the capital of Monrovia.

"I welcome and will embrace the presence of American troops in Liberia. I think it will be essential for stability," he said. "I don't understand why the United States government would insist that I be absent before its soldiers arrive."

Fleischer said the president encourages Taylor to "back up his encouraging words with deeds."

"Stability is important, but stability will be impossible to achieve unless Mr. Taylor leaves," says Fleischer. "The president has said he needs to leave now, quickly, soon and that's where it stands."

He confirmed that the United States, led by Secretary of State Colin Powell, is deeply involved in ongoing talks about how to persuade Taylor to step down and where he should go.

Powell said he was consulting the United Nations and leaders in Africa, and spoke of "a severe humanitarian crisis emerging" in Liberia as well as the safety of American diplomats there. "All of these factors are being taken into consideration."

President Bush's senior security advisers are split on whether to send U.S. troops to Liberia, which could make it harder for him to make a decision before his five-nation trip to Africa on Monday.

Taylor, indicted by the United Nations for war crimes, is battling a three-year insurgency to unseat him from power.

Tired of the fighting that has ravaged their capital in recent weeks, thousands of Liberians marched behind an American flag, imploring President Bush to send troops and restore lasting peace to the war-torn nation.

The march by about 2,000 demonstrators to the U.S. Embassy Thursday came amid growing calls for U.S. intervention.

"No more Taylor! We want Bush! We want peace," said demonstrator Andrew N'golo. "We are prepared to give our bodies as living sacrifices if that's what it takes to bring peace to Liberia."

Mr. Bush told various African news media, including the African service of the Voice of America that he won't take a "no" from Taylor. He added that the Liberian president must step down for the sake of his country and to ensure peace.

There were no reports of arrests or injuries. But across town, a few hundred supporters of Taylor said his departure would set a precedent for Washington to topple any African leader it wants.

Defense officials said the U.S. military commander in Europe has been ordered to begin planning for possible American intervention in Liberia.

Specifics on the number and types of U.S. troops are still to be worked out and approved by President Bush, but National Security Adviser Condoleezza Rice said Mr. Bush has made no decision yet on how the United States will address the crisis. She reiterated Thursday that Taylor "needs to leave because Charles Taylor is the problem."

A directive called a "warning order" was sent overnight to European commander Gen. James Jones, asking him to give the Pentagon his estimate of how the situation in the West African nation might be handled.

Mr. Bush is trying to decide how to respond to international pressure that he send up to 2,000 troops to help enforce a cease-fire in the country wracked by fighting between forces loyal to President Taylor and rebel groups trying to oust him.

CBS News Correspondent David Martin reports one option the president is considering calls for sending about 700 soldiers, under the condition they would come out in a matter of months and be replaced a by U.N. peacekeeping force.

Some in the administration have also suggested that a contingent of several dozen soldiers at the embassy in Monrovia along with stepped up diplomatic efforts might suffice. In line with that, one official said, U.S. officials said they are pressing the effort to get Taylor to leave the country.

In an interview with CBS Radio on Wednesday, Taylor said he would be willing to leave within 90 days if a peaceful transition could be arranged.

He said he was not sure if "asking the democratically elected president to leave is the solution, but I will leave," he said. "Of course, that is subject to hearing what President Bush has to say."