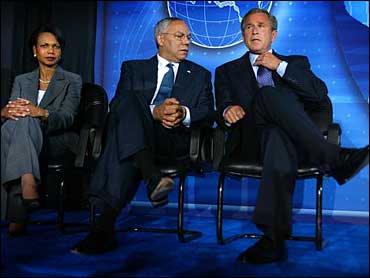 The president spoke in Abuja, Nigeria, at the end of a five-country trip through Africa.
Mr. Bush asserted in his State of the Union address in January that Iraq had sought nuclear materials from Africa. Nearly six months later, the White House acknowledged the charge was false, and the tempest that followed has shadowed Mr. Bush on his five-country trip through Africa.

"The president is pleased that the director of Central Intelligence acknowledged what needed to be acknowledged, which was the circumstances surrounding the State of the Union speech," Fleischer continued. "The president said that line because it was based on information from the intelligence community, and the speech was vetted."

But some in Congress weren't as quick to want to put the mater to rest.

Rep. Edward Markey (D, Mass.), a member of the intelligence subcommittee of the Committee for Homeland Security, told CBS News bluntly that, "There's no question that Mr. Tenet has to step down." The only question now, Markey said, is who in the White House knew about the nuclear "threat" that didn't exist.

Sen. Richard Durbin (D, Ill.), said to CBS News that, "The president has been embarrassed by information which he said, and now had to say to the American people, was not true. That has to change. People have to be held accountable."

CBS News terrorism consultant Raymond Tanter, a former National Security Council staff member said, " I anticipate that George Tenet ... will be probably be sacrificed on this one." Tanter explained that, "He has taken the fall, and I think the administration will wait to see whether this flies. I'd doubt (it will). ... And then what happens is that, can you have a wounded director of central intelligence stay on the job? I don't think so. I think Tenet will have to resign."

Administration officials said that despite the miscue they did not expect Tenet to resign. He is the lone holdover from the Clinton administration and, while distrusted by some conservatives, has enjoyed Mr. Bush's confidence.
"I've heard no discussion along those lines," CIA spokesman Mark Mansfield said Friday night when asked whether Tenet might consider resigning.

CBS News Correspondent Mark Knoller noted that, "While the White House denies it was looking for a fall guy, in various ways it had made clear it expected Tenet to accept responsibility for the presidential misstatement."

In a carefully scripted mea culpa, the White House on Friday blamed the CIA for its January misstep and Tenet finished the job hours later with a dramatic statement accepting responsibility. Mr. Bush had said that the CIA had reviewed his address and did not raise any alarms.

The statement on Iraq seeking nuclear material "did not rise to the level of certainty which should be required for presidential speeches, and CIA should have ensured that it was removed," Tenet said.

The one-two punch was designed to quell a growing political storm, fueled in part by members of Congress and Democratic presidential hopefuls, that challenged the credibility of the administration's arguments that Iraq was trying to reconstitute its nuclear weapons program before the U.S. invasion in March.

The Washington Post points out that Tenet's admission has also sparked a new round of calls from Democrats for a broader investigation of Mr. Bush's use of intelligence than the more limited inquiries that have been launched in both the House and Senate. But Republicans have defended the administration and Friday, Sen. Pat Roberts (R-Kan.), chairman of the Senate Select Committee on Intelligence, pointedly questioned Tenet -- not the White House.

CBS News Correspondent David Martin says, "Whoever deserves the blame, it appears the White House, in its desire to make the strongest case possible against Iraq, tried too hard to get the statement into the speech, and the CIA did not try hard enough to keep it out."

Former White House advisor David Gergen, who was a major player in crafting State of the Union adresses under Presidents Reagan and Clinton, told CBS News Correspondent Jim Acosta it's not enough for Tenet to take the blame.

"Somebody in the administration, not in the agency, not at the CIA, wanted to put this in the speech and got the CIA to sign off on it, even though everybody knew within the U.S. government that there were real doubts about the validity of the report. And that's what constitutes the misleading quality of it."

And The New York Times says there are still "major questions about whether there was a failure to communicate the doubts of some intelligence analysts to the White House or whether, as some senior intelligence officials maintain, in the prelude to the war, the White House stripped much of the nuance and balance from intelligence reports to make the threat from Mr. Hussein seem more urgent and the need for action more immediate."

The current controversy evolves around Mr. Bush's assertion in his State of the Union address that Iraq had tried to buy uranium from the African country of Niger. A month later, the administration retracted the allegation after learning that the British intelligence it was based upon had been forged.

Tenet acknowledged Friday that the CIA had tried unsuccessfully for months to substantiate the British allegation and that State Department intelligence analysts believed the claim was "highly dubious," yet neither stopped Mr. Bush from making the claim in a single sentence of his annual address to the nation.

"These 16 words should never have been included in the text written for the president," Tenet conceded in a statement.

"Let me be clear about several things right up front," he said. "First, CIA approved the president's State of the Union address before it was delivered. Second, I am responsible for the approval process in my agency. And third, the president had every reason to believe that the text presented to him was sound."

The director took his cue from Mr. Bush and Rice, who hours earlier blamed the error on the CIA.

"I gave a speech to the nation that was cleared by the intelligence services," Mr. Bush told reporters in Uganda. If the CIA director had concerns about the information, "these doubts were not communicated to the president," Rice added.

Tenet said there were "legitimate questions" about the CIA's conduct, and he sought in his statement to explain his agency's role.

He said CIA officials reviewed portions of the draft speech and raised some concerns with national security aides at the White House that prompted changes in the language. But he said the CIA officials failed to stop the remark from being uttered despite the doubts about its validity.

"Officials who were reviewing the draft remarks on uranium raised several concerns about the fragmentary nature of the intelligence with National Security Council colleagues," Tenet said. "Some of the language was changed. From what we know now, agency officials in the end concurred that the text in the speech was factually correct that the British government report said that Iraq sought uranium from Africa."

CIA officials recognized at the beginning that the allegation was based on "fragmentary intelligence" gathered in late 2001 and early 2002, the director said.

A former diplomat was sent by the CIA to the region to check on the allegations and reported back that one of the Nigerien officials he met "stated that he was unaware of any contract being signed between Niger and rogue states for the sale of uranium during his tenure in office," Tenet said.

The diplomat sent to the region has alleged he believed Vice President Dick Cheney's office was apprised of the findings of his trip. But Tenet said the CIA "did not brief it to the president, vice president or other senior administration officials."

Tenet said that when British officials in fall 2002 discussed making the Niger information public, his agency expressed their reservations to the British about the quality of the intelligence.

A CIA report last October mentioned the allegations but did not give them full credence, stating "we cannot confirm whether Iraq succeeded in acquiring uranium ore."

Because of the doubts, Tenet said he never included the allegations in his own congressional testimonies or public statements about Iraqi efforts to obtain weapons of mass destruction, and Secretatry of State Colin Powell didn't include the uranium claim when he made his case to the United Nations about Iraqi WMDs.

Meanwhile in London, a newspaper charged Saturday that a British government dossier detailing Iraq's alleged weapons of mass destruction included information culled from the Internet and other public sources even though it claimed to rely mainly on intelligence.

A report in the vehemently anti-war Independent newspaper said the dossier, published in September, drew heavily on sources already in the public domain.

The newspaper said many of the document's allegations were similar to those in a January 2001 paper by then-U.S. Defense Secretary William Cohen, Senate testimony by Tenet, an unclassified CIA report to the American Congress and a report by the London-based International Institute for Strategic Studies think tank.

A spokesman for Prime Minister Tony Blair said the government stands by the dossier and that it represented the assessment of British intelligence officials.

CBS News reporter Charles D'Agata says it's shaping up as a face-off between the CIA and British intelligence.

In a letter released from the Foreign Office, Foreign Secretary Jack Straw said the allegation was based on reliable intelligence that was NOT shared with the U-S.

To make matters worse, the letter also says Britain WAS NOT MADE AWARE until recently that the US had sent its own envoy into Niger to investigate the claim and found it unsubstantiated, D'Agata adds.