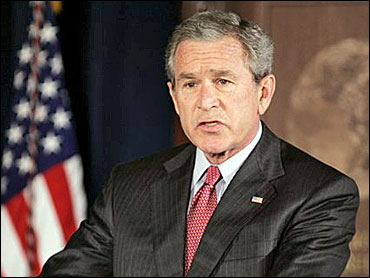 On the offensive against critics of his Iraq policy, President Bush on Wednesday claimed economic progress in parts of the war-torn country, reports CBS News correspondent Peter Maer.

"More of Iraq's people are seeing the benefits a Democratic society can bring," Mr. Bush said.

But he conceded that stubborn security challenges remain.

"The terrorists and Saddamists have been able to slow progress but they haven't been able to stop it," the president said in a speech to the Council on Foreign Relations.

Mr. Bush's address was the second in a series of four to answer criticism and questions about the continuing U.S. presence in Iraq more two and a half years after the war started.

It was an attempt by Mr. Bush to rebuild trust on Iraq and acknowledge for the first time that mistakes have been made, and, more importantly CBS News chief White House correspondent John Roberts reports, point out he has learned from them.

In particular, Mr. Bush cited Najaf, 90 miles south of Baghdad, and Mosul in northern Iraq — once the sites of some of the bloodiest battles of the war — as two cities where headway is being made, giving Iraqis more of a stake in their country's future.

"In places like Mosul and Najaf, residents are seeing tangible progress in their lives," Mr. Bush said. "They're gaining a personal stake in a peaceful future and their confidence in Iraq's democracy is growing. The progress in these cities is being replicated across much of Iraq."

But even the more sober assessments don't tell the whole story in Iraq. Electricity is still below pre-war levels, Roberts reports. Clean water and sewage remain a problem in much of the country and more than half of Iraqis are still unemployed or underemployed.

In a recent CBS News/New York Times Poll, President Bush's approval ratings climbed 5 percent to 40 percent, but he is still in the midst of his lowest job approval rating of his presidency.

The latest series of speeches amount to a public relations campaign to respond to political pressure that has mounted as U.S. deaths have eclipsed 2,100. He and other administration officials are working to shore up slumping public support for the war in the run-up to the Dec. 15 vote in Iraq to create a democratically elected government that will run the country for the next four years.

While the president talked about reconstruction projects and the reopening of schools, markets and hospitals, the upgrading of roads and the growth of construction jobs in the two cities, he also acknowledged that challenges remain.

"Iraqis are beginning to see that a free life will be a better life," Mr. Bush said. "Reconstruction has not always gone as well as we had hoped, primarily because of the security challenges on the ground. Rebuilding a nation devastated by a dictator is a large undertaking."

"Again, I think the president owes the American people a much more detailed description of what he thinks success is," Reed said. "Complete victory is a nice slogan, but what does it mean and how long will it take?"

House Minority Leader Nancy Pelosi suggested that Mr. Bush was out of touch with reality in Iraq. "Just because he says thing are improving there, doesn't make it so," the California Democrat said.

In his speech, Mr. Bush acknowledged that there's still plenty of work left to do in cities like Najaf and Mosul.

"Like most of Iraq, the reconstruction in Najaf has proceeded with fits and starts since liberation," he said. "It's been uneven. Sustaining electric power remains a major challenge."

"Security in Najaf has improved substantially but threats remain," Mr. Bush added. "There are still kidnappings and militias and armed gangs are exerting more influence than they should in a free society."

Critics of the administration's reconstruction strategy in Iraq say not enough has been done since the U.S.-led invasion to reduce unemployment, step up oil production and keep the lights on.

"There's no doubt there are a lot of good things happening economically, but to conclude, therefore, that the economy is fundamentally healthy or that it's improving fast enough to really help us with the war, I think goes too far," said Michael O'Hanlon, foreign policy analyst at the Brookings Institution, a liberal think tank in Washington.

The administration also is trumpeting progress on the economic front in a 35-page booklet titled "National Strategy for Victory in Iraq" (.pdf) that it released a week ago when the president gave the first speech of the series at the U.S. Naval Academy. There, he highlighted progress in training Iraqi army and police forces. Democrats dismissed his remarks at the time as a stay-the-course speech with no real strategy for success

"This is quiet, steady progress," Mr. Bush said Wednesday. "It doesn't always make the headlines and the evening news. But it's real and it's important and it is unmistakable to those who see it close up."

Senate Democrats were issuing a report Wednesday saying the U.S. faces a reconstruction gap. While the administration cites the number of new schools built, roads paved and businesses created, "the simple fact is that basic needs — jobs, essential services, health care — remain unmet," according to the report obtained by The Associated Press.

"Iraq's economic progress has fallen significantly short of administration's goals," the Democratic report said. "Clearly, efforts to grow Iraq's economy have been challenging because Saddam Hussein left his nation's economic infrastructure in shambles. However, the Bush administration has exacerbated the challenge by its poor planning and policies."