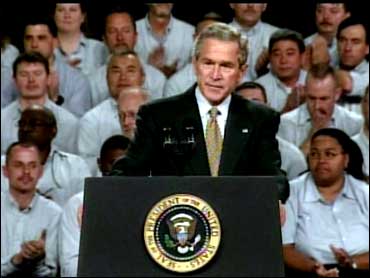 President Bush called on American businesses on Monday to live up to their pension promises, saying too many companies are not putting away enough money to protect the retirement benefits of their workers.

"My message to corporate America is you need to fulfill your promises," Mr. Bush said. "When you say to a worker, 'This is what they're going get when they retire,' you better put enough money in the account to make sure the worker gets that what you said."

In a speech on the economy, the president said federal rules governing pensions are confusing and misleading and allow companies to technically play by the rules without funding the promises they make. In the end, taxpayers wind up footing the bill because of federal pension insurance, he said.

"So Congress needs to straighten up these rules," Mr. Bush said. Members of his economic team said pension-reform legislation moving through Congress is not tough enough. "And I'm not going to sign a bill that weakens pension funding for the American workers," he said.

The president made his remarks in a speech before a friendly audience at the Deere-Hitachi Construction Machinery Corp. in Kernersville, N.C. Before the speech, he took a tour of the plant and got a chance to pitch in, tightening a part alongside one of the plant's workers, CBS News reports. The president sported safety goggles during the tour.

Trying to calm Americans' anxieties about the economy, Mr. Bush said the economy is growing and added 215,000 jobs in November. He called on Congress to extend tax cuts that are due to expire, and urged passage of long-pending health and energy legislation.

"This economy is strong and the best days are yet to come for the American economy," Mr. Bush said.

Mr. Bush's approval on handling the economy was at 37 percent in an AP-Ipsos poll in early November, the lowest rating yet on the economy. More recent public polls have shown a solid majority of Americans have a pessimistic view of the health of the economy these days despite signs that it has been gaining strength after blows delivered by the hurricanes this fall and a spike in energy prices.

But public opinion analysts have suggested that uncertainty about the war in Iraq is affecting the public's mood in other areas, such as their view of the economy.

Democrats were quick to criticize the president.

"It is his runaway budget and trade deficits, billions spent on tax giveaways, backwards-looking energy plan designed by and for special interests, and inaction during this country's health care crisis that have created a myriad of problems for our children's generation," said Sen. Harry Reid, D-Nev., the Senate minority leader.

Former Sen. John Edwards, D-N.C., his party's 2004 vice presidential candidate, said Mr. Bush's speech was "nothing more than a politician's attempt to help himself. Instead, he should be helping the American people. The legacy of this president is a mess in Iraq, millions of Americans falling into poverty, millions without health care, and out of control gas prices."

The article said legislation emerging from Senate negotiations would relax rather than strengthen funding rules for pensions, while a bill moving through the House was weakened by the long transition period it allows before tighter funding requirements take effect.

"Unless these bills are strengthened, they could result in weaker pension funding that increases the potential that workers will lose benefits and taxpayers will have to bail out the pension insurance program," the article said.

"It's no secret that some companies don't want to pay more to support their pension promises," the article by Chao, Snow and Gutierrez said. "It's also no secret that labor unions would rather bargain for new wages than ask companies to fund benefits their members already have."

"But even if the pension insurance system picks up the bill if promises can't be kept, rank-and-file workers — and potentially taxpayers — ultimately pay the price for this behavior; just ask any United Airlines retiree whose pension was reduced to the maximum federal guarantee," the article said.

"Similarly, responsible employers are harmed, because their insurance premiums must be increased to pay off the pension insurance agency's deficit," the article said.

"We must not kick this problem down the road by extending that temporary relief while further postponing reforms. The problem continues to grow and more workers' pensions are at risk."