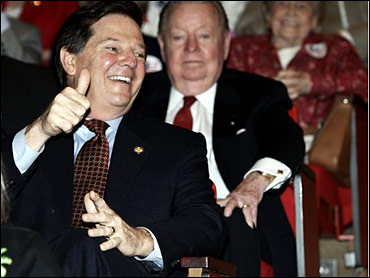 Mr. Bush traveled to Galveston, Texas, to pitch his proposal to add private investment accounts to Social Security. DeLay didn't participate in the public discussion and sat several rows back in the audience.

But the presence of the man seen by the White House as crucial to pushing Mr. Bush's plans through Congress was no accident.

DeLay was included in the event held near his congressional district — and offered a ride back to Washington on Air Force One along with a few other Texas Republicans — to show that "the president appreciates his leadership in the House," White House press secretary Scott McClellan said.

CBS News White House Correspondent Mark Knoller reports that Mr. Bush took the time to offer a DeLay personal salute, saying, "...I appreciate the leadership of Congressman Tom DeLay in working on important issues that matter to this country."

The president also took care to note that he had talked privately backstage with DeLay, "who kindly joined us today."

Earlier, there were cheers and shouts of "We love you, Tom" and "We're with you, Tom" from the audience when DeLay walked in the auditorium for the Bush event.

The committee chairman, Sen. Charles Grassley, R-Iowa, said that doing nothing will trigger at least a 28-percent cut in benefits by 2041, showing why the current Congress should work on changes to achieve "sustainable solvency."

"Those of you that are bad-mouthing every other suggestion out there, suggest your own plans," the 71-year-old part-time farmer exhorted, his voice rising.

Grassley's committee was conducting the first congressional hearing on Mr. Bush's request to draft Social Security legislation. The president has made change in the system his top domestic priority.

The Democrats, meanwhile, were also busy in a bid to continue the party's united opposition to the Bush plan. Groups on both sides of the issue plan large rallies on Capitol Hill today, to sway opinions and move votes.

Cara Morris, of Americans United to Protect Social Security, said the group's protest would an important message: "We want these Finance Committee members to know that the public is not in favor of privatization; in fact, they're overwhelmingly against," she told CBS Radio News.

The Finance Committee's top Democrat, Sen. Max Baucus of Montana, also said that Social Security faced financial problems, but he added that personal accounts would only increase those problems by triggering more government borrowing to finance the startup costs.

A Washington Post-ABC News poll out Tuesday found a decline in public support — only 45 percent of those surveyed favored Bush's plan to divert Social Security taxes into private investments, compared with 56 percent who had supported it in a March poll.

Social Security, created by Franklin D. Roosevelt during the Depression, is facing a demographic shift that will challenge its ability to provide benefits.

The program currently takes in more in payroll taxes than it pays out in benefits to about 47 million recipients, including retirees, the disabled and survivors. That trend is projected to end in 2017, after the baby boom generation has begun retiring. By 2041, the system will have exhausted a trust fund built up to continue paying full retiree benefits. Then, according to program analysts, payroll taxes will be able to cover only about 72 percent of promised benefits.

Bush concedes that his proposal, which would let younger workers invest income equivalent to 4 percentage points of their 6.2 percent Social Security payroll tax, will not solve Social Security's financial problems. Rather, he believes it will cushion the blow of future benefit cuts by creating an alternate stream of income that might benefit from compounding interest or historically higher rates of market return.

The Washington Post-ABC News poll found that 64 percent of those surveyed disapproved of the job Bush was doing on Social Security and his overall approval rating was 47 percent, which matched his all-time low. A total of 1,007 randomly selected adults were surveyed by telephone April 21-24 for the poll, which had a margin of sampling error of plus or minus three percentage points.

Among those testifying at the hearing was Robert Pozen of MFS Investment Management. He has proposed "progressive indexing" of benefits in which checks for poorer retirees remain linked to wage growth, benefit checks for wealthier retirees are linked to slower-growing prices, and those in the middle receive benefits based on a combination of the two indexes.

The others panelists were Peter Orszag, a Clinton administration official who opposes privatization, and Peter Ferrara of the Free Enterprise Fund and Michael Tanner of the Cato Institute, both of whom support privatization.

"There's no question that Democrats have sort of won the first few battles on this by obstructing, but I do think that one thing that Bush has made a big advance on is that there is a financial crisis facing Social Security, and if we don't do anything, the Titanic is going to hit the iceberg," Steve Moore, founder of the Free Enterprise Fund, said in advance of the hearing.

House Democrats, emboldened by polling results, have been united in opposition to the president's privatization proposal. They are preparing to pivot soon to supporting proposals aimed at boosting personal savings outside the federal retirement program.