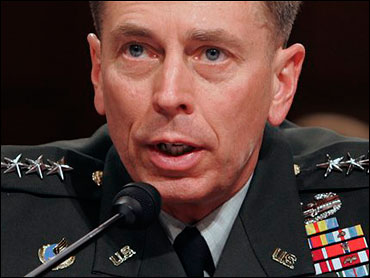 President Bush will tell the nation this week he plans to reduce the American troop presence in Iraq by as many as 30,000 by next summer, but will condition those and further cuts on continued progress, The Associated Press has learned.

CBS News has learned that the White House has requested 15 to 20 minutes of network television time for this Thursday at 9 p.m. EDT.

In the speech, Mr. Bush will endorse the recommendations of his top general and top diplomat in Iraq, following their appearance at two days of hearings in Congress, administration officials said. The White House plans to issue a written status report on the so-called surge on Friday, they said.

The officials spoke on condition of anonymity because Mr. Bush's speech is not yet final. Mr. Bush was practicing the speech and putting the final touches on it even as the U.S. commanding general, David Petraeus, and U.S. Ambassador Ryan Crocker were presenting their arguments on Capitol Hill.

The reductions envisioned by the White House mirror those proposed by Petraeus and would leave approximately 130,000 U.S. troops on the ground by August 2008, roughly the same level that existed before Mr. Bush ordered the buildup early this year, the officials said. Now, there are 168,000 U.S. troops in Iraq.

In the speech, the president will say he understands the deep concerns Americans have about U.S. involvement in Iraq and their desire to bring the troops home, they said. Mr. Bush will say that after hearing from Petraeus and Crocker, he has decided on a way forward that will reduce the number of troops but not abandon Iraq, according to the officials.

The address will stake out a conciliatory tone toward Congress, but Mr. Bush will place more conditions on the pace of reductions to the pre-buildup level of 130,000 than Petraeus did.

Petraeus recommended that a 2,000-member Marine unit return home this month without replacement. That would be followed in mid-December with the departure of an Army brigade numbering 3,500 to 4,000 soldiers. Under the general's plan, another four brigades would be withdrawn by July 2008 - though he said it was premature to set the pace of that withdrawal.

That would leave the U.S. with about 130,000-135,000 troops in Iraq, although Petraeus was not precise about whether some of the several thousand support troops sent with extra combat forces would remain after July. A few thousand additional military police, for example, were sent to deal with extra detainees.

At the White House, Mr. Bush met Tuesday afternoon with House and Senate lawmakers of both parties and he publicly pledged to consider their views. "It's very important before I make up mind that I consult with leaders of the House and the Senate," he said.

After meeting with the president, Democratic leaders were to huddle privately at the Capitol and discuss their options. Republicans too considered ways they could influence the debate, including legislation that would put Petraeus' plan into law.

In his speech, Mr. Bush will adopt Petraeus' call for more time to determine the pace and scale of withdrawals below 130,000 and offer to report to Congress in March about such plans, one official said.

As Petraeus and Crocker have, Mr. Bush will acknowledge difficulties, and the fact that few of the benchmarks set by Congress to measure progress of the buildup have been met, the official said. Yet, he will stress that a precipitous U.S. withdrawal would be a catastrophe for Iraq and U.S. interests.

The president will discuss "bottom up" security improvements, notably in Anbar Province, which he visited on Labor Day and where Sunni leaders have allied themselves with U.S. forces to fight insurgents. And, he will note incremental progress on the political front despite unhelpful roles played by Iran and Syria, the official said.

Crocker was particularly keen on detailing diplomatic developments, including Saudi Arabia's move to open an embassy in Baghdad and a third conference of Iraqi neighbors to be hosted by Turkey in Istanbul at the end of October.

Republican support for the Iraq war remains on shaky ground in Congress, epitomized by heated questioning of Petraeus Tuesday by GOP senators.

"The level of security incidents has decreased significantly since the start of the surge of offensive operations in mid-June," said Petraeus.

But many rank-and-file Republicans say they are deeply uneasy about keeping troops in Iraq through next summer, but they also remain reluctant to embrace legislation ordering troops home by next spring. Democrats had anticipated that a larger number of Republicans by now would have turned against Mr. Bush on the war because of grim poll numbers and the upcoming 2008 elections.

If Republican support for the war holds, as it might for now, Democrats would have to soften their approach if they want to pass an anti-war proposal. But they remain under substantial pressure by voters and politically influential anti-war groups to settle for nothing less than ordering troop withdrawals or cutting off money for the war - legislation that has little chances of passing.

Word of Mr. Bush's plan spread on a day in which several Republicans on the Senate's Foreign Relations Committee and its Armed Services Committee sharply questioned Petraeus and Crocker in separate hearings.

"Are we going to continue to invest blood and treasure at the same rate we're doing now? For what?" asked Sen. Chuck Hagel, R-Neb., who supports legislation setting a deadline to bring troops home.

Whereas Republicans were once deferential to the thinking of officials running the war, particularly uniformed officers, Hagel and other GOP senators on the panel said they doubted that simply giving war commanders more time would necessarily yield results.

"In my judgment, some type of success in Iraq is possible, but as policymakers, we should acknowledge that we are facing extraordinarily narrow margins for achieving our goals," said Sen. Richard Lugar of Indiana, the top Republican on the Foreign Relations Committee.

Sen. Norm Coleman said he appreciates plans to return troop levels to 130,000 but that he wants a longer-term vision other than suggestions that Petraeus and Crocker return to Capitol Hill in mid-March to give another assessment.

"Americans want to see light at the end of the tunnel," said Coleman, R-Minn.

Echoing testimony given to the House on Monday, Petraeus and Crocker acknowledged that Iraq remains largely dysfunctional but said violence had decreased since the influx of added U.S. troops.

Crocker said he believed Iraq had "almost completely unraveled" in late 2006 and early 2007. The increased security, if given more time, could pave the way for political reconciliation, he said.

The ambassador said he fears that announcing troop withdrawals, as Democrats want, would focus Iraqi attention on "building the walls, stocking ammunition and getting ready for a big nasty street fight" rather than working toward reconciliation.

"I do believe that Iraq's leaders have the will to tackle the country's pressing problems, although it will take longer than we initially anticipated because of the environment and the gravity of the issue," Crocker said.

The stakes are high, he added.

"An Iraq that falls into chaos or civil war will mean massive human suffering - well beyond what has already occurred within Iraq's borders," Crocker said.

The hearing fell on the anniversary of the Sept. 11, 2001, terrorist attacks.

One unusual moment in Tuesday's hearing came when Petraeus was asked if he believes the surge strategy in Iraq was making America safer, reports Reid. Petraeus said he doesn't know and that he's so focused on the mission, he hasn't yet sorted that out.

Warner said he hoped the general kept in mind the casualties that might result from his recommendation. He also said he did not think the U.S. strategy should rely on Baghdad's political progress because it might not happen.