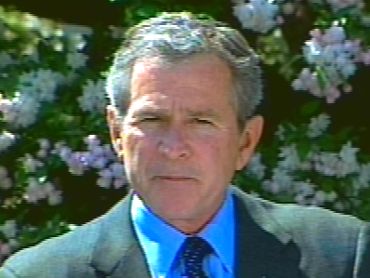 President Bush, basking in the success of the war in Iraq and a long getaway at his beloved central Texas ranch, returns to Washington ready to promote his embattled tax cut plan and other domestic priorities.

On Sunday, speaking to reporters after attending Easter services at Fort Hood, an Army post a short helicopter ride from the Prairie Chapel Ranch, Mr. Bush looked ahead to a non-war agenda.

"I will continue doing what I have been doing ... working on our economy and working to modernize the Medicare system," he said.

He had remained out of sight since Wednesday, when he arrived here from a quick stop in St. Louis to talk about the Iraq war and push his proposed tax cuts. He was joined in celebrating Easter by his wife, parents, twin daughters and mother-in-law.

Other family members, a few unidentified friends and national security adviser and confidant Condoleezza Rice were also among those welcomed to the ranch, where the president spent his weekend as he usually does here: exercising, chopping cedar, doing "home projects, a little fishing."

"Nothing better than fishing with your dad, and Barney," his dog, he said.

At Fort Hood, which sent many of its troops to Iraq, Mr. Bush met briefly with two former prisoners of war rescued in Iraq a week earlier.

"I am particularly grateful that these two men were with us today. I thank God for their lives," he said outside the chapel, flanked by Chief Warrant Officers David S. Williams and Ronald D. Young Jr., helicopter pilots who had returned to the base only hours earlier from Germany.