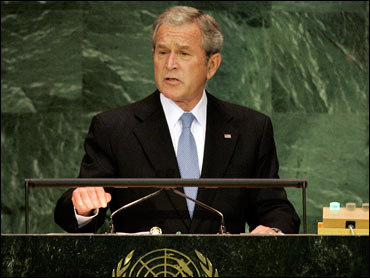 President Bush announced new sanctions Tuesday against the military dictatorship in Myanmar, accusing it of imposing "a 19-year reign of fear" that denies basic freedoms of speech, assembly and worship.

"Americans are outraged by the situation in Burma," the president said in an address to the U.N. General Assembly. The military junta renamed the Asian country Myanmar, but the United States does not recognize the change.

Iranian President Mahmoud Ahmadinejad, a bitter foe of the United States, sat in the chamber and checked his watch during Mr. Bush's remarks. First lady Laura Bush, also present for the president's speech, walked right by the seated Iranian president. The two had no contact.

After signaling out Burma, Mr. Bush turned next to Cuba.

"In Cuba, the long rule of a cruel dictator is nearing its end," said Mr. Bush.

Mr. Bush urged other nations to support the struggle for democracy in Afghanistan, Iraq and Lebanon. He also challenged the U.N. to uphold its pledge to fight for freedom in lands of poverty and terror.

"The nations in this chamber have our differences, yet there are some areas where we can all agree," Mr. Bush said. "When innocent people are trapped in a life of murder and fear, the declaration is not being upheld. When millions of children starve to death or perish from a mosquito bite, we're not doing our duty in the world. When whole societies are cut off from the prosperity of the global economy, we're all worse off."

"Changing these underlying conditions is what the declaration calls the work of larger freedom and it must be the work of every nation in this assembly," he said. "This great institution must work for great purposes: to free people from tyranny and violence, hunger and diseases, illiteracy and ignorance and poverty and despair."

Mr. Bush urged the U.N. to reform its Human Rights Council, created to replace the discredited Human Rights Commission. But Mr. Bush criticized the new body for ignoring abuses in places like Iran "while focusing its criticism excessively on Israel."

But the president's call for change came with the suggestion of a deal: the United States' support for the highly contentious issue of expanding the Security Council, the U.N.'s most powerful body. Mr. Bush suggested that Japan is "well-qualified" to be an additional member and said "other nations should be considered as well."

The council has 10 rotating members elected for two-year terms and five permanent members with veto power - the United States, Russia, China, Britain and France. Mr. Bush said the United States would listen to all "good ideas."

"Basic freedoms of speech, assembly and worship are severely restricted," he said. "Ethnic minorities are persecuted. Forced child labor, human trafficking and rape are common. The regime is holding more than a thousand political prisoners, including Aung San Suu Kyi, whose party was elected overwhelmingly by the Burmese people in 1990.

"The ruling junta remains unyielding, yet the people's desire for freedom is unmistakable," he said.

Mr. Bush said the United States would tighten economic sanctions on the leaders of the regime and their financial backers and impose an expanded visa ban on people responsible for human rights violations, as well as their family members. "We will continue to support the efforts of humanitarian groups working to alleviate suffering in Burma and urge the United Nations and all nations to use their diplomatic and economic leverage to help the Burmese people reclaim their freedom," he said.

The policies came as Myanmar's military government issued a threat Monday to the barefoot Buddhist monks who led 100,000 people marching through a major city. It was the strongest protest against the repressive regime in two decades.

About a dozen anti-war protesters were arrested during a peaceful demonstration of President Bush's speech before the U.N. General Assembly. They were among about 400 people opposing the Bush Administration's war in Iraq, and its incarceration in Guantanamo Bay of more than 300 men on suspicion of terrorism or links to al Qaeda or the Taliban. Many in the crowd wore orange jumpsuit in solidarity with the Guantanamo detainees.

The arrested demonstrators were taken into custody by police after kneeling on the sidewalk in an act of civil disobedience near the United Nations. One of them, 58-year-old Bill Ofenloch of Manhattan, said they were trying to serve an "arrest warrant" on Mr. Bush for "high crimes against humanity."

The president spent Monday trying to revive the Mideast peace process. He was reminded of the hurdles as Palestinian President Mahmoud Abbas insisted that a U.S. peace conference deal with "issues of substance," a sign of old skepticism that accompanies new hope.

Late Tuesday morning, Mr. Bush was to meet with another friend under tense circumstances, Iraqi Prime Minister Nouri al-Maliki. The Iraqi leader is deeply frustrated over the killing of 11 Iraqi civilians by security guards with Blackwater USA, a private contractor.