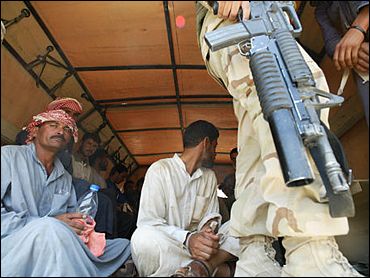 President Bush pledged Wednesday that the United States will deal harshly with those who attack American troops in Iraq, and said such violence will not undercut his resolve to keep Americans there until stability is restored.

"Anybody who wants to harm American troops will be found and brought to justice," Mr. Bush said at an impromptu news conference at the White House. "There are some who feel like if they attack us, we may decide to leave prematurely. They don't understand what they're talking about if that's the case."

Increasing attacks have killed more than 23 U.S. soldiers and wounded dozens more since Mr. Bush declared major combat over on May 1.

On Tuesday, assailants traveling in a vehicle in central Baghdad fired a rocket-propelled grenade at a U.S. military vehicle, wounding three soldiers. Another grenade slammed into a U.S. truck on a road south of Baghdad, injuring three soldiers, one of whom died at a field hospital overnight.

"There are some who feel like that, you know, the conditions are such that they can attack us there. My answer is bring them on," Mr. Bush said. "We got the force necessary to deal with the security situation."