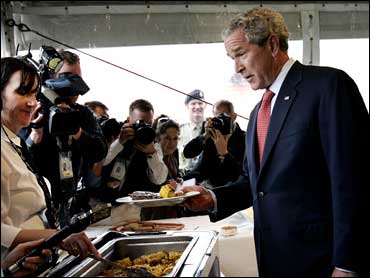 The Australian media are seemingly obsessed with President Bush. Sydney's Channel 7 has a "Bush Cam" focused on the presidential hotel. With no Bush sighting, the morning anchor speculated, "He's sleeping in."

In something of an understatement, the president told Australian reporters, "You people are recording my every move here." Little did he know that Channel Seven's aerial camera showed him and his security detail mountain biking at a secluded former police training center.

A private aircraft flying near the president in the U.S. would draw a potentially lethal response from authorities but the Australian eye in the sky provided surprisingly close-up shots of him pedaling on the dirt trail. The station colorfully reported that he was "going bush" with the bike expedition. The station shared the footage with U.S. TV networks.

There is a great deal of curiosity about the presidential entourage. A TV station reported that the president is traveling with 150 national security advisors. That exaggerated calculation would likely surprise National Security Advisor Stephen Hadley; he is back in Washington, supervising work on the Iraq war status report that the administration will release next week.

The Australian media dutifully reported on Mr. Bush's culinary adventures, too. In a front page item headlined When I met Dubya, he did his noodle, Sydney Morning Herald columnist Annabel Crabb said Mr. Bush dictated the story lead, telling reporters, "I'll help you out. Here's your first sentence. 'The president takes a spoon...'"

As he dished up some pasta, the president told the scribes, "Eight noodles! There's your story. Nice helping you out!"

The Morning Herald also has an interactive Web page that allows readers to drag a variety of Australian attire (from slouch hats to Dame Edna's glasses) onto a paper doll-like image of President Bush.

Late Wednesday, a camera crew shot images of the president through the window of a boat after he dined with Australian Prime Minster John Howard. Unaware of the coverage, the president was seen loosening his belt; the anchor noted Mr. Bush apparently enjoyed the meal.

The media are also reporting on presidential security. While the size of the Secret Service contingent is always closely-guarded information, one TV station confidently reported the president is being guarded by 250 agents.

The subject of security precautions also came up at Mr. Bush's joint news conference with Prime Minister Howard. When an Australian reporter attempted to ask him about security, the president stopped him. "I hope you feel safe," the president said.

"You feel inconvenienced, obviously," Mr. Bush said. He added, "To the extent I've caused this, I apologize."