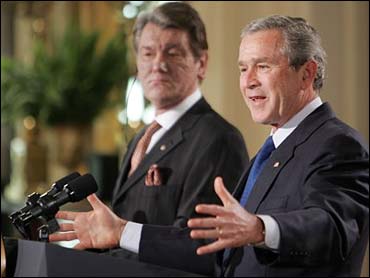 President Bush said Monday the United States will still bear the burden of reconstruction costs in wartorn Iraq even as some of its coalition partners withdraw their forces.

"The fundamental question is: is it worth it? And the answer is, Absolutely it's worth it for a free Iraq to emerge," Mr. Bush said, standing alongside visiting Ukrainian President Viktor Yushchenko.

Mr. Bush said the U.S.-led coalition's strategy in Iraq remains to train Iraqi soldiers and security forces so they can defend their own country.

"The president made clear to me in my first conversation with him that he campaigned on the idea of bringing some troops out. He's fulfilling a campaign pledge. I fully understand that," Mr. Bush said.

"But he also said he's going to cooperate with the coalition in terms of further withdraws," he added. "And I appreciate that."

Mr. Bush said he appreciated the job that Ukrainian forces did in helping protect Iraqis vote in January.

Mr. Bush promised to support Ukraine's bid to join the World Trade Organization by the end of this year and to seek to persuade Congress to lift remaining trade restrictions on Ukraine that are a vestige of the Cold War.

"In America, you've got a strong friend," Mr. Bush said.

Mr. Bush was less committal on Ukraine's bid to join NATO, although he said "There is a way forward ... to become a partner of the United States and other nations in NATO. It is a path and we want to help Ukraine get on that path as quickly as possible," he said.

On another subject, Mr. Bush said he welcomed Syria's vow to fully remove its troops from the country. "And that not only means troops but it means security forces, as far as I'm concerned," he added.

"When they say, 'We're going to leave the country,' we expect troops and security forces to leave'," he said.

"Secondly, it's important for this election to take place on time," he added.

Syria has said that it plans to pull all its troops and intelligence agents from Lebanon by April 30.

A United Nations team could be dispatched to verify the withdrawal, a U.N. envoy said Sunday after meeting President Bashar Assad.

Mr. Bush called Yushchenko a courageous leader, "a friend to our country and an inspiration to all who love liberty."

"The world is changing. Freedom is spreading," he said, citing Ukraine, Afghanistan and Iraq as examples of fledgling democracies.

For his part, Yushchenko said, "Our ideals are simple and eternal. We want democracy and freedom."

He said that ending corruption and easing poverty remain top challenges to his government. He asserted that he was committed to nourishing the rule of law and human rights in his country.

Yushchenko, who succeeded Leonid Kuchma, has promised a thorough investigation of corruption and misdeeds that allegedly flourished during his predecessor's 10 years as president.

Yushchenko, who will address the Congress later in the week, is here to lobby for aid and investment, win Washington's support for joining NATO, and greet Ukrainian-Americans on an itinerary that takes him to New York, Chicago and Boston, accompanied by his wife Kateryna, an American-born Ukrainian.