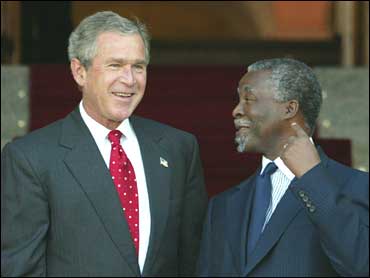 President Bush suggested Wednesday that any U.S. military help in ending brutal civil unrest in Liberia might consist mostly of advisers and trainers to avoid stretching American forces too thinly around the globe.

"We won't overextend our troops, period," Mr. Bush said at a joint news conference with South African President Thabo Mbeki, who had pressed him on what role the United States would play in the crisis.

African nations want the United States to do more to end the bloodshed in the west Africa nation and see to it that President Charles Taylor leaves office. But U.S. lawmakers, including some leading Republicans, have questioned the wisdom of yet another major overseas military entanglement with so many troops already on the ground in Iraq, Afghanistan and elsewhere.

Still weighing a final decision, Mr. Bush noted that the Pentagon had already trained African peacekeepers, including those from Nigeria and Senegal.

"It's in our interest that we continue that strategy so that we don't ever get overextended," he said.

On the second leg of a five-nation Africa trip, Mr. Bush promoted his $15 billion, five-year plan to combat AIDS and proposals to increase trade with sub-Saharan Africa. His first stop was Tuesday in Senegal. Still ahead: visits to Botswana, Uganda and Nigeria.

Despite substantial differences on some issues, especially the war in Iraq, President Bush seemed to get along fine with South African President Mbeki, reports CBS News Correspondent Mark Knoller.

Iraq didn't come up in their talks, but they did discuss the importance of restoring democracy to Zimbabwe. Mbeki resists turning up the pressure on President Robert Mugabe – which the u.s. wants – but he declared that he and Mr. Bush "are absolutely of one mind" on the issue.

At the news conference, Mr. Bush also defended anew his decision to go to war with Iraq, even though the White House earlier this week conceded his assertion in his January State of the Union address that Saddam Hussein was trying to buy uranium from Niger was based on false information.

"One thing is for certain, he's not trying to buy anything right now," Mr. Bush said.

With U.S. troops in Iraq coming under increasing attacks, questions have been raised at home about whether Mr. Bush should commit still more troops to easing civil unrest in Liberia.

Lawmakers of both parties have said that the president should first get congressional approval for such an action.

Mr. Bush has been under growing international pressure to send troops to participate in a peacekeeping force once the rebellion in Liberia ends. West African nations have said they will provide 3,000 soldiers for the mission but have suggested the United States send 2,000 more.

Both Mr. Bush and Mbeki suggested that the U.S. contribution might be mainly of a non-combat variety.

"We need a lot of support, logistics-wise and so on," Mbeki said.

Mbeki said that the military burden in Liberia peacekeeping "really ought to principally fall on us as Africans."

In Washington, Defense Secretary Donald Rumsfeld told the Senate Armed Services Committee that the president was considering the appropriate U.S. role. He said Mr. Bush has told world leaders that he intends to assist Liberia, a nation that was founded in the 1800s by freed U.S. slaves and has retained close links with the United States.

Rumsfeld noted that "assessment teams" requested by the president are still in the region. Mr. Bush has said he will not make a final call until these teams report back.