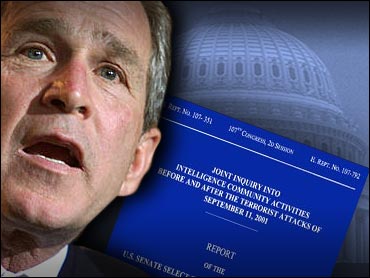 President Bush refused to declassify part of a congressional report on possible links between Saudi government officials and the Sept. 11 hijackers, saying Tuesday that making the entire document public "would help the enemy" by revealing intelligence sources and methods.

The administration's decision was a rebuff to Saudi Arabia, which was upset by the contents of the intelligence report. Saudi Foreign Minister Saud al-Faisal was meeting later in the day with Bush.

"I absolutely have no qualms at all because there's an ongoing investigation into the 9-11 attacks, and we don't want to compromise that investigation," Mr. Bush said at a news conference with Israeli Prime Minister Ariel Sharon in the Rose Garden.

"If people are being investigated, it doesn't make sense for us to let them know who they are," Mr. Bush told reporters before meeting with al-Faisal.

Moreover, Mr. Bush said, "declassification of that part of a 900-page document would reveal sources and methods that would make it harder for us to win the war on terror. ... It would help the enemy if they knew our sources and methods."

The decision came against a background of controversy over whether officials in Saudi Arabia had connections with the terrorists.

Besides the Sept. 11 report, the Saudi minister also will discuss the campaign against terror and Mideast peace prospects, one of the officials said.

Earlier, citing the Saudi ambassador's claim that his country has "nothing to hide," Sen. Bob Graham called on Mr. Bush to release the report.

Doing so "will permit the Saudi government to deal with any questions which may be raised in the currently censored pages, and allow the American people to make their own judgment about who are our true friends and allies in the war on terrorism," Graham, D-Fla., said in a letter to Mr. Bush. Graham, who co-chaired the inquiry, is a Democratic presidential candidate.

After the report was released last Thursday, Saudi Ambassador Prince Bandar bin Sultan issued a statement saying that "28 blanked-out pages are being used by some to malign our country and our people."

"Saudi Arabia has nothing to hide. We can deal with questions in public, but we cannot respond to blank pages," he said.

Citing those comments, Graham said Bandar "has joined in asking that the pages be declassified."

The information is widely believed to center on Saudi Arabia, birthplace of Osama bin Laden and 15 of the 19 hijackers. Saudi Arabia has vehemently denied supporting the hijackers.

In discussing the classified section this weekend on Fox News Sunday Graham said high officials of a foreign government "made substantial contributions to the support and well-being of two of these terrorists and facilitated their ability to plan, practice and then execute the tragedy of Sept. 11."

He declined to identify the country, citing laws against divulging classified information.

The top Republican senator on the inquiry, Richard Shelby, said Sunday that 95 percent of the classified pages could be released without jeopardizing national security.