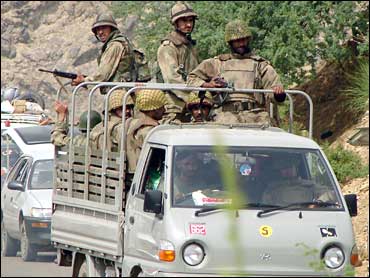 President Bush's decision on stem cell research appears to be a classic attempt to find the middle ground on a heated issue.

Political analyst Craig Crawford thinks the president succeeded in his effort to straddle the middle by allowing federal funding for research only on already existing embryonic stem cell lines.

"He worked both sides to the center," Crawford told CBSNews.com. "He didn't satisfy partisans but he did convince folks in the middle."

"The decision showed real presidential leadership," said Sen. Orrin Hatch, R-Utah, a pro-life conservative who favors stem cell research. "It was a thoughtful, deliberative decision made after prayer and the most careful consultation with ethicists, families, scientists, doctors and religious leaders."

Mark Miller, executive director of the moderate Republican Leadership Council praised Bush saying, "The fact that President Bush approached this important issue in such a deliberative manner ought to be commended."

"The president's statement tonight reflects a genuine willingness to embrace the concept that embryonic stem cell research may yield hopeful applications and that the federal role in steering this research is a constructive one," he said.

The legions of partisans on both sides of the emotional issue, however, stuck to their beliefs and chastised Mr. Bush after his address.

Some strict pro-life advocates, many of whom are fellow Republicans, feel betrayed by the president's decision, believing that any embryonic research, even the limited amount offered by Bush, is morally wrong.

"I'm ... disappointed that the federal government will fund embryonic stem cell research even though the proposed research will take place upon embryos that have already been destroyed," said House Majority Whip Tom DeLay, R-Texas.

Sen. Sam Brownback, R-Kan., said, "I am saddened by the president's decision to allow taxpayer dollars to fund the use of stem cells derived from young humans."

Conservative groups also voicetheir displeasure with Bush's compromise. Ken Connor, president of the Family Research Council, said Friday: "With the president's decision ... the ends justify the means. We can kill some in order to cure others."

Religious leaders chimed in on the president's announcement as well. Bishop Joseph Fiorenza, president of the U.S. Conference of Catholic Bishops, said, "The trade-off he has announced is morally unacceptable: The federal government, for the first time in history, will support research that relies on the destruction of come defenseless human beings for the possible benefit to others."

Judicial Watch, a conservative legal group that says it "investigates and prosecutes government abuse and corruption," accused the president of breaking a campaign vow. In fact, the group is threatening an investigation into "the politics behind President Bush's reneging on his campaign promise."

"'Read my lips,' Judicial Watch sees this flip-flop as another form of government dishonesty and abuse," the group's chairman, Larry Klayman, said in a statement.

Click here for a closer look at the Bush presidency.
Click here for more on the stem cell debate.
Not surprisingly, Democrats who supported federal funding of the research also blasted Bush.

"Once again, the president has done the bare minimum in order to try and publicly posture himself with the majority of Americans," said House Minority Leader Richard Gephardt, D-Mo. "But Americans know that this is not the decision that the science community needs to go forward in full force."

Sen. Edward Kennedy, D-Mass., added: "Restrictions on this lifesaving research will slow the development of the new cures that are so urgently needed by millions of patients across America."

Kate Michelman, president of the National Abortion and Reproductive Rights Action League, said, "The president tonight offered a weak and limited compromise on stem cell research. In an attempt to politically straddle the issue, the president has pleased no one."

But even with all the dissenting opinions, political analyst Crawford believes Bush's stem cell decision will add up to little controversy in the long run.

The anti-abortion rights side will eventually get their way after the existing stem cell lines are used up; while Democrats, "in the end, all they're selling is the fact that Bush is pro-life." And, says Crawford, "They can make that case using the overall abortion argument," as opposed to the more complicated stem cell issue.

Crawford concludes that by straddling the middle on this controversial issue, "Bush really dodged a big one."