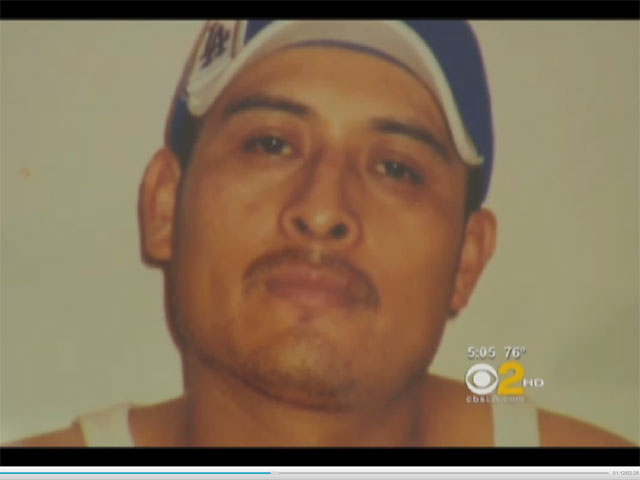 (CBS) VAN NUYS, Calif. -- A cook and father of five was gunned down in the restaurant where he worked after a fight broke out over how long it was taking for the customers to get their food, reports CBS Los Angeles.

According to police, Raul Lopez, 38, was fatally shot in the chest last Friday night around 11 p.m. at Hoagies and Wings in Sherman Oaks as he tried to ward off a group of five men allegedly causing a disturbance.

Police said one of the customers apparently became angry with Lopez about how long it was taking for the food to be prepared, and some racial slurs were reportedly used.

Lopez is believed to be his family's sole provider, and was working one of his jobs when he died. He and his wife, Guadalupe, have a 16-year-old son, a 7-year-old son and three girls younger than six.

Police released surveillance images of two suspects on Tuesday. All five are described as black men in their 30s. They allegedly fled in a Cadillac Escalade or other dark-colored SUV after the shooting.

Three of the suspects were described as large men about 6'4" tall and 300 pounds or more. The weapon used to kill Lopez was a semi-automatic handgun, according to police.

Anyone with more information about who killed Lopez was urged to call detectives at (818) 374-0040.