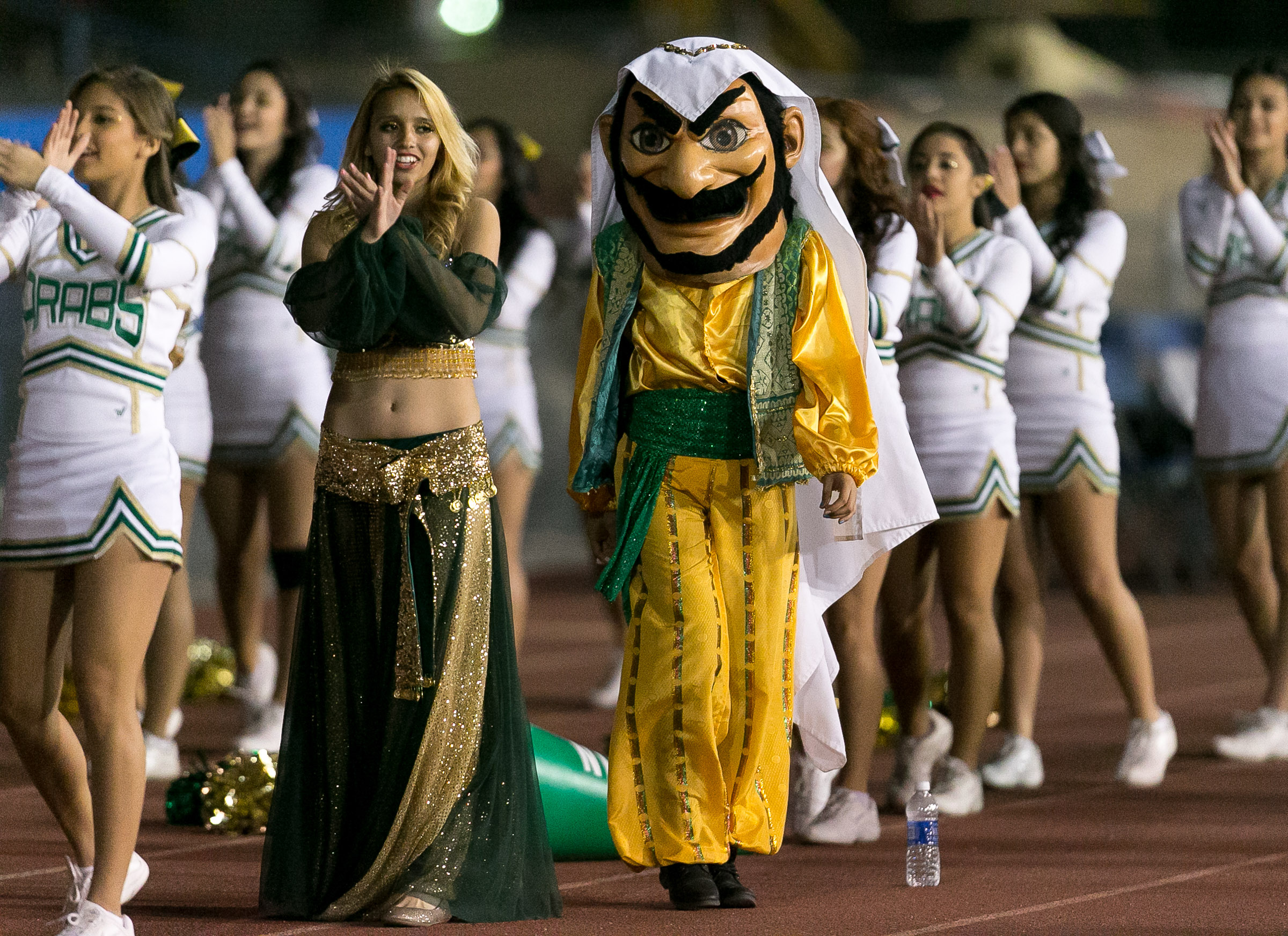 LOS ANGELES -- On game days in Thermal, where date farms and desert surroundings evoke the Middle East and nearby communities have names like Mecca and Oasis, fans cheer a high school team known as the Arabs.

A belly dancer jiggles on center court. And a black-haired, mustached mascot wearing a head scarf rallies the crowd.

At least that's the way it was done for decades in the community 120 miles southeast of Los Angeles until Arab-Americans recently objected to a hook-nosed, snarling image used to represent Coachella Valley High School.

The school has agreed to give the mascot a makeover, but not to drop the nickname.

"We're still going to stick with the Arab," said school board president Lowell Kemper after scores of residents defended the tradition dating back generations. "It's just a matter of whether we have a change in the caricature of the mascot."

It's a twist on a decades-old issue that has centered primarily on Native American mascots, logos and nicknames and has transformed Indians to Cardinal at Stanford University and Chieftains to Redhawks at Seattle University.

But the Arab debate spurs the same set of questions: Is it possible to craft a mascot in the image of an ethnic group that doesn't offend, or are schools better off scrapping the idea altogether?

The debate comes as the more familiar Indian controversy has gained increased heat.

Last year, Oregon's Board of Education decided to cut state funding to schools that fail to retire their Native American mascots, while Wisconsin passed a law in 2010 that forces schools to drop race-based mascots if a complaint is filed and the practice is found discriminatory.

Earlier this year, President Barack Obama said if he owned the National Football League's Washington Redskins he would consider altering the team's name, winning praise from Native American groups that have led rallies and run ads pushing for the change.

"The things that we once did are now viewed clearly as inappropriate and wrong, and that is the hardest thing for so many who don't want to let go of yesterday - but it is the reality," said E. Newton Jackson, a professor of sport management at University of North Florida.

The American-Arab Anti-Discrimination Committee complained last month that the Coachella Valley mascot perpetuates negative stereotypes of Arabs and Arab-Americans after one of its members raised questions about the image. The group sent a letter (PDF) to school district officials about the mascot.

The move prompted a community-wide debate and the school district formed a committee to redesign the mascot in a more flattering light.

"When you get into trying to characterize any ethnic group, I think you're crossing into a danger zone, and you're bound to offend individuals," said Abed Ayoub, the American-Arab Anti-Discrimination Committee's director of legal and policy affairs. "You have this caricature that's supposed to represent Arabs but really does not. The look is very orientalist, very demeaning - it's just not who we are."

The mascot was chosen in the early 20th century and "never intended to dishonor or ridicule anyone," district superintendent Darryl Adams wrote in a letter to the local Desert Sun newspaper. Adams said the mascot was chosen in light of the region's production of crops common in the Middle East but conceded that times change, and "symbols and words embraced for decades may need to be considered for change as well."

Coachella Valley isn't alone in invoking images of Arabs or Muslims. In the Los Angeles suburb of Alhambra, the high school football team, known as the Moors, features a caricature of a scowling, dark-skinned man with two swords on its Facebook page.

Yasmin Nouh, a spokeswoman for the Council on American-Islamic Relations in greater Los Angeles, said her group was going to speak with that school about making a change.

"Whether it is Arab, Norwegian, Greek or Moors, we believe ethnic or religious-based mascots are OK as long as they're portrayed in a respectful manner and don't reinforce negative stereotypes," Nouh said.

A message was left at the Alhambra Unified School District seeking comment.

Those who defend ethnic mascots often claim they were chosen out of respect and honor. But teams in the early 20th century usually wanted to adopt a belligerent image to instill fear in their opponents, said Ellen J. Staurowsky, professor of sport management at Drexel University in Philadelphia, who has researched mascots over the last two decades.

In 2005, the NCAA cracked down on the use of "hostile" and "abusive" American Indian mascots, logos and nicknames, which prompted a flurry of changes in team images. University of Illinois, for example, retired the image of Chief Illiniwek in 2007 but kept the name Fighting Illini, while the Southeastern Oklahoma State Savages became the Savage Storm.

The College of William & Mary remained The Tribe but stopped using Indian feathers on its logo.

Some universities were allowed to keep their nicknames by getting permission from local tribes, such as Florida State's Seminoles and Utah's Utes.

At Coachella Valley, the Arab's image has evolved. He was once depicted riding on horseback while carrying a spear, later changed to the surly caricature plastered on the school gym's wall.

Rich Ramirez, president of the school's alumni association, said graduates love the Arab. When some community members questioned whether the mascot ought to be changed in the aftermath of Sept. 11, 2001, the alumni stood by him, Ramirez said.

Barbara Munson, who chairs the Wisconsin Indian Education Association's Indian Mascot and Logo Task Force, said ethnic mascots breed discrimination, even when a school is trying to promote cultural ties or its students' own heritage.

"What might be positive in your community leads to the opposing team having homecoming and slogans like 'kill the Indians,'" she said.