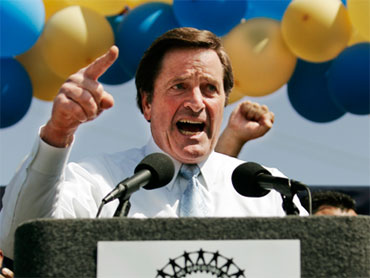 Lt. Gov. John Garamendi is one step closer to the next chapter of his long political career after winning the Democratic nomination for a Northern California congressional seat.

Garamendi, 64, defeated three other well-funded Democrats in Tuesday's special election for the 10th Congressional District seat that opened earlier this year when former Rep. Ellen Tauscher was confirmed to an undersecretary position in the State Department.

He received 26 percent of the vote in the relatively low turnout election but failed to win the race outright, meaning he will face Republican Dave Harmer in a special general election on Nov. 3. Candidates from the Green, American Independent and Peace and Freedom parties also will be on the ballot.

"The public recognized that I was prepared to go to Congress to address the issues that affect this district and the state," Garamendi said in a telephone interview from his Walnut Creek campaign headquarters.

Harmer said he has no plans to adjust his campaign message, which focused on bringing fiscal responsibility to Congress. He will be challenged to overtake Garamendi in a district where Democrats hold an 18-point voter registration edge over Republicans. Independents make up 20 percent of voters.

"We don't need to change a thing about the campaign, the team or the message," said Harmer, a 47-year-old attorney who is the son of former Lt. Gov. John Harmer.

He took nearly 21 percent of the vote and handily beat five other GOP candidates. Harmer is hoping for an upset in November by capitalizing on voter discontent.

"Our basic message is there is no such thing as an unpaid debt," he said.

A Garamendi victory in the runoff would allow Republican Gov. Arnold Schwarzenegger to nominate a replacement to fill the remainder of his term as lieutenant governor. The Assembly and Senate, both with Democratic majorities, would have to approve the nominee on a majority vote.

The heavily gerrymandered 10th Congressional District stretches from the eastern San Francisco Bay area to the edge of Sacramento and includes parts of four counties - Contra Costa, Alameda, Solano and Sacramento. Because of the Democratic advantage, money poured in for the party's candidates, which included two state lawmakers.

Throughout the campaign, Garamendi played up his experience of serving nearly three decades in public office. The former state lawmaker and state insurance commissioner said he could hit the ground running if elected to replace Tauscher.

DeSaulnier, who finished second among the Democrats with nearly 17 percent of the vote, promoted himself as the best choice for local representation. His campaign had attacked Garamendi for not living in the district, even though there are no residency requirements for the seat.

Buchanan was hoping to keep a woman in the office and emphasized her executive experience as a former manager at Delta Dental, an insurance company.

Woods, 29, was hoping to be the first openly gay black in Congress. He said he called Garamendi late Tuesday to congratulate the lieutenant governor and offered his support. He would not rule out a future bid for office.

"It was an amazing experience," he said. "I got, even if it was for a very limited time, to be a voice for the uninsured, for those who are soldiers in the veterans hospitals. I'm so humbled I had the opportunity."

Woods generated interest by promoting his personal story as a West Point graduate and openly gay officer who was forced to leave the Army under its "Don't ask, don't tell" policy. He left the military as a captain.

In another special election Tuesday, Los Angeles voters were trying to fill the 51st Assembly District seat that became vacant in May when former Assemblyman Curren Price won a seat in the state Senate.

Gardena Councilman Steven Bradford, a Democrat, had nearly 53 percent of the vote with all precincts reporting, but it was not immediately clear whether he would end up with enough votes to avoid a runoff. An undetermined number of provisional ballots, including vote-by-mail ballots that arrived late at precincts and the Los Angeles County Registrar's Office, remain to be counted.

That process could take several days.

If Bradford does not win outright, he would face Republican candidate David Coffin, who had 17 percent of the vote, in November.

Results in both elections were delayed by about two hours Tuesday night after Schwarzenegger issued an executive order allowing firefighters and other emergency personnel on the fire lines time to cast their votes at local command posts.

Seven people voted at a special polling station set up at the command center for the Station fire in Los Angeles County, said Ken Pimlott, a deputy director with the California Department of Forestry and Fire Protection. Two others cast ballots while fighting the Big Meadow fire in Mariposa County, he said.