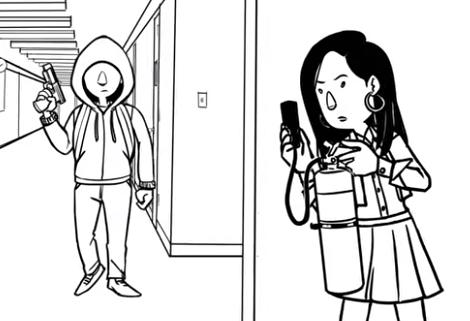 NORTHRIDGE, Calif.  -- "Run, hide, fight" -- those are the keys to survival in an active shooter situation, according to a new video released Tuesday across the California State University system. As CBS Los Angeles reports, the clip offers some obvious pointers, but also lays out some vital advice some of us may not think about.

"If it sounds like a gun or even firecrackers, consider that it may be an attack," the video states.

Campana says she thinks the video could actually help students — it could even save lives.

"Main thing is, don't look for confirmation. If you have a gut feeling go with it," said Campana.

The video emphasizes running toward any exit. Don't look behind you. Mass shooters don't typically chase. If you can't escape the campus, know a good hiding place.

The most horrifying and final option may be confronting the shooter, but it may be your only choice.

"You have surprise on your side. The attacker is not expecting armed resistance until police arrive. This is your advantage," the video states.

Bottom line — the clip emphasizes that all students have to be prepared.

"Like it said, it's unlikely to happen, small chance, but it could happen," said Mojica.

The entire video is posted to YouTube. It was distributed to campuses in January and was shared via social media starting Feb. 1.