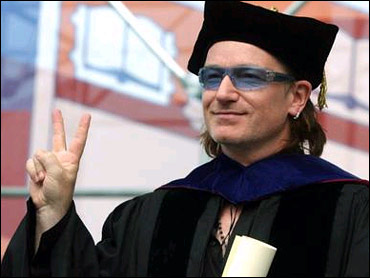 Bono was careful not to say anything off-color during his commencement speech at the University of Pennsylvania.

"The FCC has taught me a lesson," the 44-year-old Irish rocker said Monday, referring to the Federal Communications Commission's declaration that an expletive he used on last year's Golden Globe Awards broadcast was indecent and profane.

Wearing blue-tinted sunglasses with a black cap and gown, the U2 frontman accepted an honorary doctor of laws from Penn President Judith Rodin. He urged graduating Penn students to live up to the ideals of America, of believing there is no problem that can't be fixed.

He also challenged them to take on Africa, with its poverty, epidemics, resentment over unfair trade rules and insurmountable debt. Bono recalled his experiences in famine-stricken Ethiopia in 1985, saying the trip made him "a rock star with a cause."

Ending Africa's extreme poverty is "cheaper than the Marshall Plan in Europe. It's cheaper than fighting wave after wave of terrorism's new recruits," he said. "We have the know-how. We have the cash. We have the lifesaving drugs. But do we have the will?"