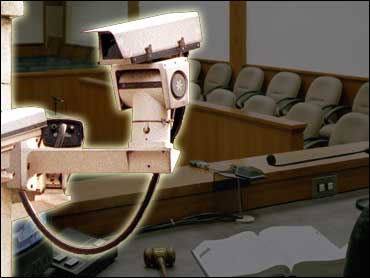 The highest court in Texas delayed a 17-year-old's capital murder trial Monday, hours after a judge ruled cameras could roll in the jury room as the teen's fate was decided.

The Texas Court of Criminal Appeals ordered State District Judge Ted Poe to explain why he has decided to let a TV documentary videotape the eventual jury deliberations in the case. The order, which came a few hours after Poe rejected prosecutors' objections to the plan, brought the trial to a halt. Jury selection had already begun.

Poe has until next Monday to reply to prosecutor's concerns. Once a written response is received, the appellate judges will decide what further action to take, said Richard Wetzel, general counsel for the appeals court.

"In unusual situations, the court will become involved in an ongoing trial. This is an unusual case," Wetzel said.

Legal experts say there has never been a TV film of jury deliberations in a U.S. death penalty case. Poe has said the film would be educational and that there is no state law prohibiting it.

The case involves 17-year-old Cedric Harrison, who is charged with fatally shooting a man during a carjacking last June.

Earlier this month, Poe approved a request from the PBS program "Frontline" to film the deliberations. Producers say they want their documentary to promote understanding of capital justice.

The plan called for an unobtrusive ceiling camera, with videotapes kept sealed by the court until after the verdict.

PBS has the approval of Harrison and his attorneys.

"We're doing it because this is a 17-year-old man that the state of Texas is attempting to kill," defense attorney Ricardo Rodriguez said during Monday's hearing, in which Poe declined to reconsider his Nov. 11 decision approving the taping. "We're going to make sure everything is done correctly."

Prosecutor Warren Diepraam said filming deliberations would cause "great harm" and could endanger the panel later.

"The process is supposed to be secret," he said. "The defendant or his family could use the deliberation process (for retaliation) after it is published."

Prosecutors also asked the Court of Criminal Appeals to step in.

Henry Schleiff, chairman and chief executive officer of Court TV, which has broadcast about 800 trials in the last 11 years, said the network has never asked to film jury deliberations.

"It's something we have not tried to do and we are actually against," Schleiff said.

Richard Dieter, director of the Death Penalty Information Center, said it is the first time he has ever heard of a camera being allowed in a deliberation room during a capital case.

"The precedent is almost always jury deliberations are private," he said. "You put them in a private room and even the judge doesn't know what is going on unless they come out with questions. It doesn't sound like a good thing."

Poe, a former prosecutor who was appointed to the bench in 1981, is well known in Houston. He has forced convicts to carry signs outside the courthouse proclaiming their crime and earlier this year said a teacher convicted of having sex with a student was "a bigger threat to our culture and our students than Osama bin Laden and his cave dwellers."

In the Harrison case, the judge said only 14 of the 110 jurors who filled out jury questionnaires voiced a concern about the filming.

"If I thought (cameras in the courtroom) would affect anybody's decision, I wouldn't do it," Poe told the Houston Chronicle last week. "I would never do anything in a trial to jeopardize justice. I believe we have the best system there ever has been. We shouldn't be ashamed of how it works. Let's show it off."

"Juries need to be free to do what they see as best without fearing repercussions from the community and this seems to fly in the face of that," Dix said.

Still, if deliberations are filmed, Dix said: "I would like to get a copy for my class."