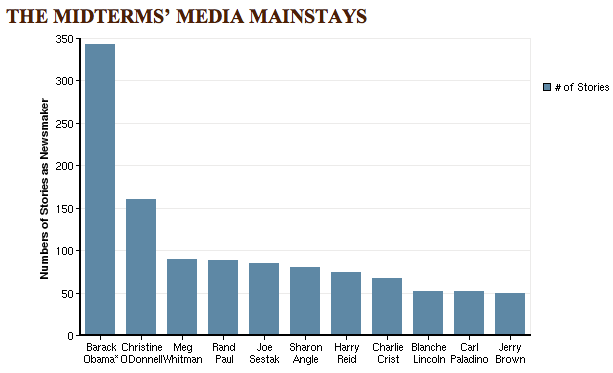 According to the Pew Research Center's Project for Excellence in Journalism, President Obama and his administration dominated the news so far this year. No surprise whatsoever in that finding, but the second place campaign newsmaker is somewhat surprising. Delaware senate candidate Christine O'Donnell followed Obama in the rankings, ahead of several other newcomers to the national political scene--Rand Paul, Sharron Angle and Carl Paladino.

The four newcomers are part of the Tea Party movement, which has garnered a great deal of attention, along with revelations from O'Donnell's life before her latest senate run. California Republican gubernatorial candidate Meg Whitman made news by spending more than $140 million of her own money in the campaign versus Democratic veteran Jerry Brown and enduring a news cycle about employing an undocumented worker as a housekeeper for nine years.