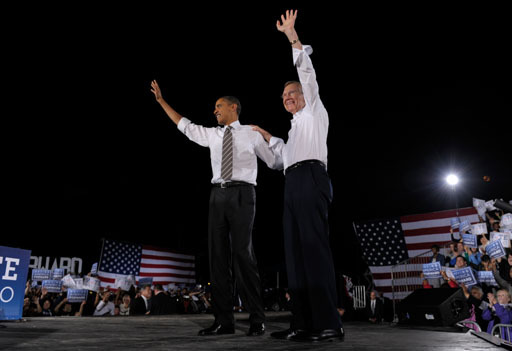 From now through Election Day CBS News chief political consultant Marc Ambinder will provide his keys to understanding the state of the campaign:

1. A lot of candidates in Democratic-leaning states are closing with Obama ads. He remains MORE popular than Democrats and the Democratic brand. Though the turnout for President Obama's rally in Columbus was 8,000, the Democratic National Committee says that 250,000 people have attended these big Obama rallies in the past two weeks.

2. Sarah Palin has a way of injecting herself into these elections whenever she pleases. She is probably responsible for getting Joe Miller nominated in the Alaska Senate race -- but her biggest impact, remember, is in South Carolina, where her backing saved Republican gubernatorial candidate Nikki Haley in the primaries. Other than that, Palin has NOT been a potent force. (We will see if her last minute visit to West Virginia yesterday helps GOP Senate candidate John Raese.)

3. The DNC's last-minute cash infusion should remind us that as much money as the GOP was able to pump in using outside groups, Democrats have used their money much more efficiently. But the GOP has been able to keep candidates in position to win because of the outside help.

See all the Ratings for Senate, House and Governors in an Interactive Map

4. Sen. Lisa Murkowski, running as a write-in candidate after losing to Joe Miller, hinted that the GOP has to earn her respect back if she wins. This will be a VERY interesting dynamic for the rump session, where she could very well vote with Democrats. DO NOT doubt for a moment that President Obama will call her on election night REGARDLESS of whether she wins or loses. She's still going to caucus with Republicans, but there are quite a few things that Democrats need a 60th vote for.

6. So IF Republicans take control of the House by a narrow margin Tuesday, what will console Democrats? GOVERNORS race wins in Florida, Ohio and Colorado. Note Michael Steele's "37 seats would be great" comments, regarding the House of Representatives. Lowering expectations a bit.

The Atlantic's Marc Ambinder is CBS News' chief political consultant. You can read more of his posts in Hotsheet here. You can also follow him on Twitter.