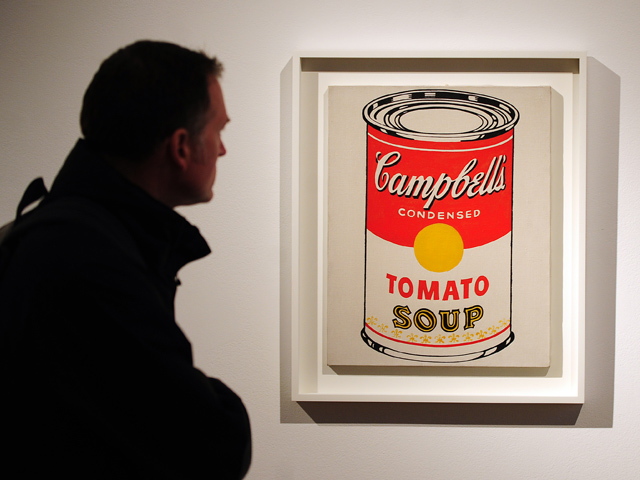 (AP) CAMDEN, N.J. - If your lunch still consists of a bowl of Campbell's tomato soup and a grilled cheese sandwich, chances are you grew up using a typewriter.

Generations of Americans have moved on from Campbell's condensed chicken noodle and tomato soups in search of heartier varieties with more sophisticated flavors. Now, the world's largest soup company is racing to do the same.

Campbell Soup (CPB) last year began a quest that led executives to a diverse group of cities including Portland, Ore. and London to figure out how to make soups that appeal to younger, finicky customers. In the year ahead, the 143-year-old company plans to roll out 50 products such as Moroccan Style Chicken and Spicy Chorizo. The ingredients may surprise those used to a plain bowl of chicken soup: tomatillos, coconut milk and shitake mushrooms.

The new soups also won't look like the big, gelatinous chunks that came in the steel cans that built Campbell into an iconic brand. These soups come in plastic pouches that are easy to open and heat up in a microwave in less than three minutes.

The remake could be a do-or-die task for Campbell. Overall canned soup consumption is down 13 percent over the past decade, according to the research firm Euromonitor International, as fresh soups have become more widely available at supermarkets and restaurants. And Campbell now has about 53 percent of the market, down from 67 percent a decade earlier.

Campbell's changes also illustrate how difficult it is for brands that appeal to older customers to become relevant to Millennials. This group, defined as those ages 18 to through early 30s, is heavily sought after by companies and marketers. But Millennials have little in common with their parents, whether it's their tastes, eating habits or cooking methods.

"I grew up with salt, pepper and ketchup," said Chuck Vila, who heads Campbell's customer insights division, which surveys the marketplace for trends. "These guys are playing around with really interesting spices from around the world."

George Veszpremy, a 32-year-old music director at a radio station in Boston, has fond memories of his mother sending him to school in the morning with a thermos of Campbell's chicken noodle.

"As a kid, you eat it and it's great. It served the purpose at the time," said Veszpremy, noting that the soups were a cheap way for his single mother to give him a quick, comforting meal.

But looking back, he said he realizes that the soup wasn't the best quality the noodles were soggy and thin, the chicken pieces were minuscule and there were no vegetables. Veszpremy said his tastes have evolved: He sticks to homemade or the soup bar at the supermarket.

To understand what makes Millennials like Veszpremy tick, Campbell executives turned into anthropologists.

The company dispatched executives to London, Nashville, Portland and other designated "hipster hubs" to meet with younger consumers face-to-face. Dozens were recruited to participate in "live-alongs," in which executives ate meals with them in their homes, peeked in their pantries and tagged along on trips to the grocery store.

In other cases, couples were invited out to "eat-alongs" at trendy restaurants to talk about food in a casual atmosphere. They were asked to bring their favorite pantry items for discussion. Participants responded by bringing a mix of spices and sauces typically found at ethnic grocery stores.

A staff of about a dozen Campbell chefs traveled for inspiration as well. In New York City, the group browsed in spice shops, bakeries and ethnic grocery stores. In Boston, they even ducked into an Urban Outfitters clothing store, just to get a better sense of the overall mindset of Millennials.

After a tour of New York City's food trucks, Campbell's executive chef Thomas Griffiths even began toying with the idea of incorporating kimchee the pungent pickled vegetable dish from Korea into a soup. But he knows that will be an acquired taste.

The field work led executives to two seemingly divergent conclusions: First, cuisines once considered exotic Thai, Indian, Brazilian have become the norm. At the same time, years of dining out mean younger consumers aren't as skilled at making meals from scratch, particularly when it comes to those very ethnic flavors. "They can't replicate the foods they enjoy when they go out," said Darren Serrao, who heads innovation for Campbell.

That realization inspired Campbell's Go plastic soup pouches, which come in flavors such as Coconut Curry, Creamy Red Pepper and Golden Lentil. Consumers tear open the pouch, stick the bag in the microwave for about two-and-a-half minutes then pour the soup into a bowl.

For older Millennials who may just be starting families or advancing in their careers, the company created Skillet sauces in flavors such as Green Thai Curry and Creamy Chipotle. The directions are simple: Heat up some protein and vegetables. Mix in the sauce. Serve with rice or pasta.

The idea is to give consumers the sense that they're creating their own dishes, without them having to shop for hard-to-find ingredients or do too much tedious prep work.

And then there's the can. Red and white with the distinctive cursive lettering immortalized by Andy Warhol it has become a piece of Americana. "For many millions of people, the can is a very sensible package," said Mary Gregg, who heads packaging for North America. "It's been around for years and people are very comfortable with it."

But executives say with younger consumers, a can just doesn't convey freshness. So the new Go soups come in white pouches featuring colorful fonts and photos of expressive, young faces. The Skillet sauces are meant to be a bit more sophisticated; they come in black pouches designed to evoke the chalkboard menus at sidewalk cafes.

But the new looks come with a price. A can of Chunky soup costs about $2.30 and has a shelf-life of about two years; the new pouches will cost about $3 and are good for about half that time.

Campbell is counting on its new soups to keep its brand relevant. While the company makes other products like Pepperidge Farm baked goods and V8 vegetable juices, soups account for half its revenue.

Still, executives remain cautiously optimistic about the fate of the new lineup. When the company reported its quarterly results earlier this week, Campbell executives said they expect sales growth in fiscal 2013. But that increase is expected to come from Campbell's recent acquisition of a premium juice company, not from its soups, broths and sauces unit.

In the latest quarter, the Camden, N.J.-based company's profit increased 27 percent as soup sales rose for the first time in two years. But that was partly the result of grocers running promotions and stocking up on low inventories as Campbell prepares to raise prices.

The company was also up against an easy comparison; in the year-ago period, soup sales had fallen by 9 percent and the results were weighed down by restructuring charges.

As for the new products that are expected to be widely available at stores later this month, CEO Denise Morrison said the company should have a better read on how they'll fare after its fiscal first quarter. "The consumer will let us know if we can be more exuberant," she said.

Executives are pushing on in the meantime.

When the company embarked on its revival efforts about a year ago, Vila, head of the company's insights division, said they wondered if they had lost an entire generation of consumers. It turned out it wasn't that simple; he said that consumers are still open to giving Campbell another chance, but that it's up to the company to deliver.

"We haven't captured them in terms of food, but we've hung onto them," Vila said. "They have memories of Campbell. They're outdated, but they're there."