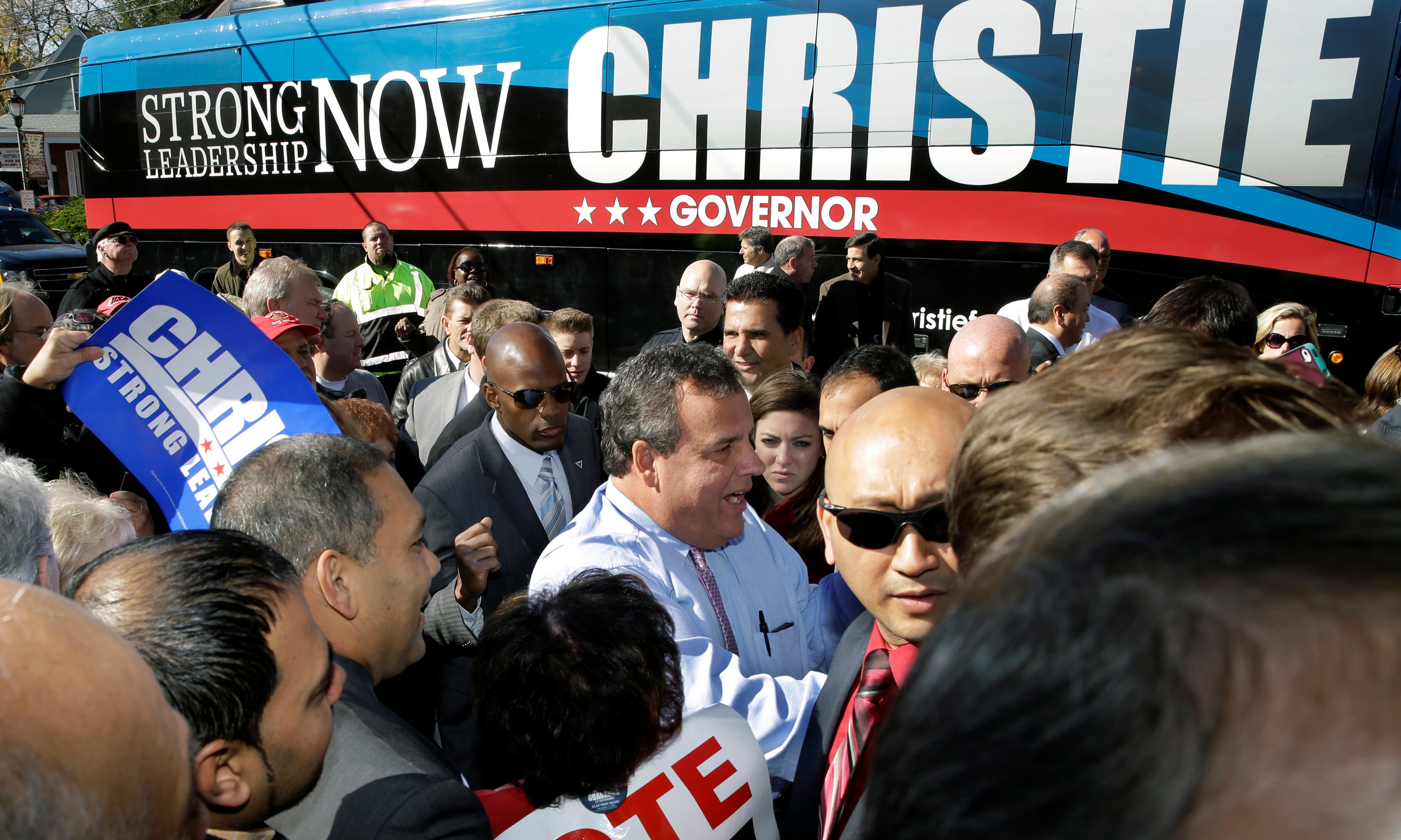 If you're watching Chris Christie in New Jersey Tuesday night, the drama isn't whether he can win

re-election for governor. The question is whether he can win so impressively over Democrat Barbara Buono that we (along with, perhaps, the party donors and voters in Iowa) start believing he could compete in a deep-blue state like New Jersey in 2016, too - as a presidential candidate.

So how do we know what that "impressive" number is? The campaigns are liable to say so no matter what. But we can estimate what it might actually take for a (hypothetical) Christie for President campaign to make New Jersey competitive, and then watch for whether he gets it Tuesday. Think of this as a viewers guide - not a prediction - so we can have some fun with the assumptions and vote targets.

Let's set a reasonable bar and call a hypothetical 2016 New Jersey "competitive" if it looks like it could be within four or five points - maybe 52 percent Democrat to 47 percent Republican, with a point or two to other parties. That's the range most swing states fall into in presidential years. How could a Christie for President campaign get there?

Right away we see the huge challenge facing the imaginary campaign, because in presidential years New Jersey's been nowhere near that close. In 2012 the gap was a crushing 17 points between President Obama and Mitt Romney; it was 15 points in 2008; John Kerry in 2004 won it by 7 even as he lost nationally. So Christie 2016 would have some serious work to do. In raw number terms, he needs to find about 250,000 more votes in 2016 than Mitt Romney got in 2012, just to get in the game, let alone win it.

As you watch Tuesday, remember to account for the different electorates; apples-to-apples comparisons between what you see Tuesday and 2016 won't quite work because Tuesday's electorate is going to be smaller than it will be in three years, on the order of one-million or more votes smaller, perhaps. Off-years like this one tend to be lower turnout, a little older, with somewhat fewer Democrats and minority voters. In other words, tonight could lean a little more Republican and inherently make Christie's 2013 percentage look a better than he really would get in 2016, all else equal.

This is the comparison so you see the difference:

The bar for him Tuesday thus becomes a little higher with crossover groups, if we want to consider their 2016 impact. He'll want to do fantastically well, because he'll need those exact same independents and crossover Democrats to come out for him again in 2016, and for them to still be numerous enough to have impact when the electorate adds another million voters, gets younger, and more Democratic again.

With independents, here's the good news for him: In his 2013 re-election polling he's absolutely crushing the competition, getting 64 percent of independents in the latest Quinnipiac poll. (That would be up from his 2009 win, too, when he got six in ten, so his pull with Jersey's independents is well-established.) He had been getting closer to 70 percent in other polls.

If he does gets two-thirds or even close to 70 percent, then he'd be almost assured of doing better in 2016 than Mitt Romney did in 2012, when Romney was even with Obama among independents. That's assuming we can take the same voters forward for this imaginary exercise, so if you're an independent who turns out to vote for Christie Tuesday, we're assuming you'll potentially vote for him if he runs for president in 2016, in the best case (for Christie) scenario. In raw number terms it would mean there would be almost a half-million independent voters willing to pull the lever for Christie, or about even with Romney's 2012 total, before the rest of the electorate even showed up.

Christie 2016 could then just break even or even lose slightly with the remaining independents who come out that year, and he'd still exceed Romney's total and could get a favorable split, let's say 60-40 or maybe better, which would be reasonably about as much as Independents break for anyone in any competitive state in presidential years.

Now the bad news for him: winning independents in New Jersey isn't enough to swing the state. There just aren't enough of them, far fewer (at 30 percent) than there are Democrats (44 percent) in major election years. That is not a typical ratio for most states, where independents are more numerous, but it also helps show why New Jersey hasn't gone Republican for President in twenty-five years. That assumed Christie 2016 gains from independents would really only be worth a few points statewide.

So to make New Jersey competitive in, the Christie 2016 campaign is going to have to win a lot of Democrats, too.

Recent polls like Quninnipiac's have him getting around 30 percent of Democrats in the governor's race. That would be remarkably good; and far better than better than Mitt Romney's meager 5 percent. For perspective, it is not at all typical of the kind of crossover we see in this hyper-partisan era, where nationally only 7 percent of Democrats voted Republican last year and 10 percent might be high in a blowout state. Then again, that's also a reason we're watching Christie in the first place.

If he does get 30 percent today it would mean that he'd be getting twice as many votes from the opposing party, even in a smaller election, as Mitt Romney got in the 2012 general. The tally could be perhaps 200,000 Democrats willing to vote for Christie compared to 80,000 who crossed for Romney. That difference, depending on its final number, could be worth a four- to six- point swing toward the Republicans and would surely make New Jersey look competitive in 2016.

We wouldn't often say this in a lopsided race, but because of this crossover narrative, Democratic turnout is such an important wild card tomorrow. Some polls have them making up around 30 percent of voters, but they were 40 percent in 2009. Low Democratic turnout might actually be a mixed bag for Christie. If a lot show up, and he wins a lot of them, those are crossover voters we'll think about in 2016, adding - literally - to the idea he could swing the state blue to red.

If few show up for him now, when he's at very popular levels, we'll be less likely to assume they would vote for him in 2016, all else equal. On the other hand, lower Democratic turnout would probably make his overall winning percentage could go up, boosted by the added influence of the remaining Republicans and Independents.

Now there's all sorts of caveats on this. We're imagining that little changes politically between now and then, which is probably silly. No one knows what three years of governance would do to make him more or less appealing to Democrats. And our imaginary Christie 2016 campaign has to go through the Republican primaries before it gets to our imaginary New Jersey that November. For a cautionary tale we have that same Mitt Romney, crushed in Massachusetts in 2012, after a campaign for the nomination that took him much further to the right than the voters of his home state.

But in the meantime, tonight if you want to know if Christie is really hitting his marks - defined as making strides toward putting New Jersey into play - those are it, all of them variable, of course, depending on turnout and the partisan breakdown. And if he does all that, his overall percent could surely end up in the low 60s - which as anyone who follows politics knows, is a rather high number in any contested statewide race.

Of course, the biggest assumption we've made in all this is that there might be a Christie 2016 campaign, which does not exist, at the moment. But it'll certainly be on everyone's minds - even more so if he gets historic numbers.