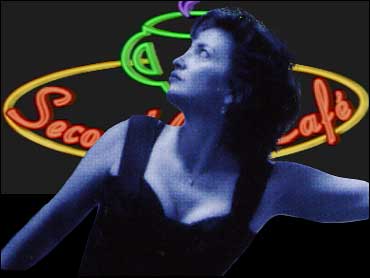 Frank Sinatra is often called the greatest popular singer, ever.

Many performers have covered the songs he made famous, but Betsyann Faiella takes standards from Ol' Blue Eyes and reinterprets them with a certain feminine flair.

Born in New York, and now living in Los Angeles, Faiella's been criss-crossing the country mesmerizing crowds, and promoting her debut album, called "Can I be Frank?"

Faiella stopped by The Saturday Early Show's Second Cup Café to perform some of the songs Sinatra made famous.

Betsyann Faiella has followed an unusual and diverse path since her cabaret debut at New York City¹s Reno Sweeney. One night after she was discovered by the club¹s owner while singing at the Empire Diner; she began appearing frequently at the Reno Sweeney and the Grand Finale, among other venues in the city. She then started a long association with the legendary cabaret impresario, Lewis Friedman and his New York club, s.n.a.f.u.

Faiella used to join Friedman on-stage as the lead singer of a band that mainly performed Friedman¹s compositions. The band was called Loo Tattoo, or alternatively Betsy and the Boys. Faiella describes the music they performed as "theatrical rock 'n' roll."

The singer toured the U.S. and Canada in the 1980s in a variety of musical revues. She has also performed her own cabaret show, appeared in television commercials and recorded jingles and voice-overs.

But, she wanted to record a CD, and Frank Sinatra was her inspiration. Faiella has performed throughout the U.S. since the August 2001 release of her debut CD, "Can I Be Frank?" She returned to her old hometown of New York in August, 2003 to make her debut at the Blue Note New York, alongside the legendary jazz musicians Hank Jones, John Blowers, Jerry Bruno, Benny Powell and Frank Wess, where critics say she made Ol' Blue Eyes proud.