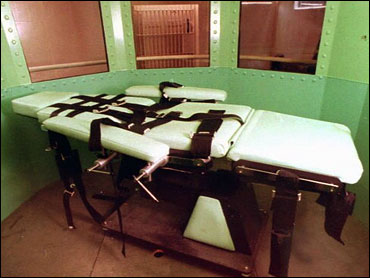 (AP)
For two hours Tuesday afternoon at a prison in Lucasville, Ohio, while the rest of us were at work or school or home, Romell Broom's team of executioners worked to find a usable vein which would deliver the lethal injections designed to stop his heart and end his life. First they tried his arms. Then they tried his legs. Broom himself, a convicted rapist and murderer, even tried to help at one point, flexing his hand and fingers while lying on his side. He grimaced. He wiped his brow. Nothing worked. His veins simply wouldn't hold up.

Eventually, long after Broom was supposed to be dead, the prison director and execution team gave up. They called the governor and asked for a reprieve. The governor relented and now Broom sits in legal limbo, waiting evidently not just for some medical procedure that would free him up to be put to death but also for some guidance from the state and federal courts about whether it now would amount to "cruel and unusual" punishment to execute him at all under Ohio's evolving (but clearly still troubled) lethal injection protocols.

The grisly details surrounding Broom's failed execution—which read like an outtake from the movie "The Green Mile" or a transcript from a torture probe-- remind us that the United States Supreme Court did not come remotely close last year to fixing the many problems that still surround lethal injection in America. It's true that the Justices upheld Kentucky's lethal injection procedures. But those measures are different from the procedures in place in Ohio, a state that consistently has had problems over the past few years ensuring that its executions are swift and humane.

In the Kentucky case, Baze v. Rees, decided in April 2008, the Court by a 7-2 margin made it more difficult but not impossible for other death row inmates to successfully challenge their state's injection protocols. Chief Justice John G. Roberts, Jr. wrote that an inmate must show both that a state's method "creates a demonstrated risk of severe pain" and also that there are other alternatives that are "feasible," "readily implemented" and capable of "significantly" reducing the risk of that "severe" pain.

Chief Justice Roberts wrote: "Simply because an execution method may result in pain, either by accident or as an inescapable consequence of death, does not establish the sort of 'objectively intolerable risk of harm' that qualifies as cruel and unusual" under the Eighth Amendment. That's the law right now. Where does Broom's botched execution fall into that legal standard? You tell me. How "severe" was his pain? How likely is it that it would occur again if the state tried to execute him again? And could Ohio come up with an alternative that would comply with the other standards set forth in the Court's opinion?

Ohio, it turns out, has been pressed for years to fix its lethal injection protocols, to bring them into some sort of compliance not just with Supreme Court standards but also with common decency. In just the past three years, two men were executed in arguably cruel and unusual fashion. In the case of Joseph L. Clark, in 2006, executioners were also unable at first to find a vein. "It don't work," Clark was reported to say. Visitors could hear him moaning and groaning behind a curtain closed to shut off a view of the execution. Some 40 minutes later, a working vein was finally found and Clark was executed.

In the case of Christopher Newton, in 2007, it took executioners two hours to find a vein and successfully administer the lethal cocktail. At the time, the Newton execution was the longest execution in the history of the Buckeye State. And it—and the attention drawn to the subject by the Supreme Court case-- finally prompted some action. Last year, under threat of judicial sanction, Ohio changed its injection protocols to try to ensure a swifter and less painful death for its capital convicts.

We know now that the new procedures don't work either. It simply cannot be a coincidence—bad luck for the men, bad news for officials-- that these ghastly events are taking place with such frequency in the same state when other states are able to execute their condemned with more precision, less pain, and fewer complications. It is no wonder that the call to end lethal injections in Ohio altogether, or at least until the right protocols are found, is getting louder and more diverse.

That's the political case. The legal case as usual is cloudy. For example, it would be surreal if Ohio now were able to argue (under Chief Justice Roberts' new standard in Baze) that because it can't find any "feasible" and "readily implementable" alternatives to the current protocols it shouldn't be required to fix its obvious problems. And I'm just waiting to see if anyone in the Ohio Attorney General's office has the gall to argue to a federal judge that because so many of its recent executions have been excruciatingly long and painful they no longer should be considered "unusual" under the Eighth Amendment.

In the meantime, Broom waits-- sore arms and legs and all. If he is "re-executed" he will become the first man in America since at least 1946 to achieve the dubious distinction, says Richard Dieter of the Death Penalty Information Center. That's some trivia that neither Ohio nor the United States Supreme Court ought to ignore.

(CBS)
Andrew Cohen is CBS News' Chief Legal Analyst and Legal Editor. CourtWatch is his new blog with analysis and commentary on breaking legal news and events. For columns on legal issues before the beginning of this blog, click here.