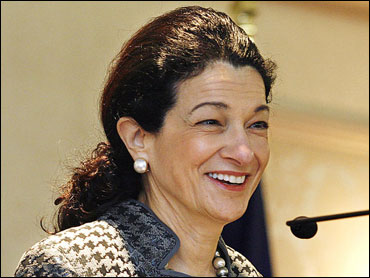 (AP)
The White House is reportedly giving special attention to the preferences of moderate Republican Sen. Olympia Snowe on the issue of health care, but it is unclear whether liberal members of Congress would be willing to accept her proposals.

As President Obama revs up his involvement in the health care debate, his administration is reportedly engaged in discussions with Snowe about her preference for a "trigger" option in health care reform. Under the "trigger" strategy, a government-sponsored health insurance plan, or "public option," would be "triggered" if the private health insurance industry did not meet certain accessability and affordability standards by a certain time.

In another sign the White House is trying to woo the support of Snow and possibly her moderate Republican colleague Sen. Susan Collins, Health and Human Services Secretary Kathleen Sebelius will be in the state of Maine today to participate in a roundtable discussion about health care sponsored by the AARP and the Maine Women's Lobby. While there, she will release a report on the importance of health insurance reform for older women, according to reports.

CBS News' Chief Political Consultant, the Atlantic's Marc Ambinder, wrote Wednesday that the White House is spreading word of its discussions with Snowe so it can gauge how liberal House Democrats react to the idea of abandoning an immediate public option in favor of the "trigger."

Today on Washington Unplugged, Ambinder suggested that it could be a challenge to get House liberals to accept a trigger plan, since so many congressmen have already cemented their position on core health care reform issues like the public option.

"It's hard to see minds change," he said.

Still, Ambinder wrote Wednesday, "Obama's aides have believed that the 50-odd progressives in the House who are demanding a public option will get their jollies if they can pass a bill out of the House, and that they will be too afraid to oppose a bill that makes it out of a subsequent conference committee -- a bill that President Obama would specifically endorse."

Leaders in the House so far sound skeptical of the compromise. An aide to House Speaker Nancy Pelosi told CBS News that they are not sure whether the president will endorse a trigger proposal, but Pelosi -- who firmly backs the public option -- will not.

Additionally, Rep. Jan Schakowsky (D-Ill.), the Progressive Caucus leader on health care issues who is typically an ally of Mr. Obama, insisted today that she will only support a bill that enacts an immediate public option, the Hill newspaper reported.

"I will support nothing short of a robust public health insurance plan upon implementation, no triggers," she reportedly said.

Democratic Caucus Vice Chairman Xavier Becerra also reportedly insisted today that a strong public option is necessary to bring down the cost of insurance and improve access. Still, he said that House Democrats must now follow the president's lead, the Hill reported.

"We had a chance, over these last eight months, to try to shape a good bill for America," Becerra said. "Now I believe the president is going to weigh in, and tell us, 'This is now how we get this across the finish line.' And that's so very important."