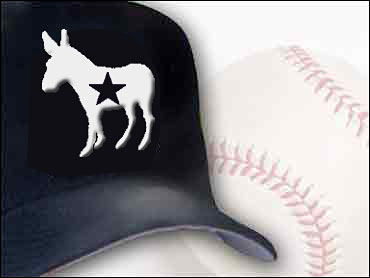 The Democratic Party is the Chicago Cubs of politics. Even if it looks like they should win, they find a way to lose.

Today, the economy is terrible, there is an enormous deficit where a healthy surplus used to be, unemployment is high, many people don't feel safer than they did on 9/12, confidence in the morality of major corporations is low, and because of the way it presented things about Iraq before the war, the current administration could turn out to be involved in the biggest and most tragic scandal in the history of the United States. In other words, in the next presidential election, the Democrats should easily hit this one out of the park. But as a lifelong Cub fan, let me give you some advice: Don't bet on it. The only thing I'm not sure about is exactly how the Democrats are going to blow it this time.

First of all, the Democrats aren't going up against the Lansing Lugnuts or some other minor league team. They are going to have to defeat the New York Yankees of politics — the Republicans. Like the Yankees, the pinstriped Republicans don't just have money, money, and more money, they also know how to win. If they strike out, they'll strike out swinging.

It's important for every team to have some veterans, and the Dems have theirs — even a general. But right now, they're doing something that every Little Leaguer knows is wrong — they're fighting among themselves. Don't they realize that after they expose each other's weaknesses and foibles, those things will not be forgotten when they have a nominee? You can't call a teammate a bum, but then after he becomes the team captain, tell everyone he's the greatest guy in the world.

Looking at the Democratic Mudville 9 (or 10), it's hard to know which players are at which positions. They have "Don't Call Me ... 'Clueless'" Joe Lieberman in right field, Howard "I'm Not Dizzy" Dean in left, and everyone else is trying to be in center. If the Republicans hit an easy fly ball, just watch those Democrats in the outfield run into each other. The ball will probably hit one of them on the head, and then fall to the artificial turf.

Maybe they'll be brought down by the old staple — the scandal. Who among these candidates will be shown to have a "corked bat?" Who cheated? Who stole? Who lied? I mean, more than is expected among politicians.

Injuries often ruin a baseball team's chances, but a candidate's health is not as important as it once was. Because of advances in medical science and changes in attitudes, the American public doesn't seem to be particularly troubled if a politician has suffered from alcoholism, cancer, heart problems, or even uncontrolled vomiting on foreign dignitaries. The only area of health that voters insist on is that candidates have a strong arm. He or she not only has to throw out that first pitch at the World Series, but also has to flex that bicep while saying, "My country can beat up your country."

Weak pitching might destroy the Democrats. Their pitches — photo ops and commercials — are rarely strong. Dukakis looked silly in a tank, but Mr. Bush looked great on an aircraft carrier. Democratic commercials usually try to appeal to the intellect, while Republican ones appeal to the emotions. If the Democrats want to have a chance, they should trade their media guys for one good Republican pitcher — someone who can throw a tricky curve when they need it.

So unless the Democrats shake up their team and start playing ball like the big boys, they aren't going to win this time, either. They are, as I said, the Chicago Cubs of politics. The big difference is, this year I honestly think the Cubs have a chance.

Lloyd Garver has written for many television shows, ranging from "Sesame Street" to "Family Ties" to "Frasier." He has also read many books, some of them in hardcover.
By Lloyd Garver